Most of the 18 people in Ashland, Mass., who viewed a film last night on “Cellphone Radiation” seemed convinced that the phones pose a danger particularly to children and young adults.

The film was one of a six-part examination of such dangers that Friends of the Ashland Library and Ashland Farmers Market have conducted since Oct. 8, 2015.

The hour and 24-minute film, created by Kevin Kunze, is called, “Mobilize: A Film About Cellphone Radiation.” It is described as “an investigative documentary that explores the potential long-term health effects, including cancer and infertility, from cellphone radiation.”

It covered recent scientific research, national legislative efforts and influence on the topic being exercised by tech companies.

Included are views of the Cellular Telephone Industries Assn. (CTIA), representing wireless communications sectors, as well as groups that feel that cellphones as currently employed are a danger to health, such as the International Agency for Research on Cancer.

Findings are provided by CETECOM, a global tech company that provides independent consulting, testing and certification of technologies. It has labs in many countries that test radiation from mobile phones and the amount absorbed by the body. 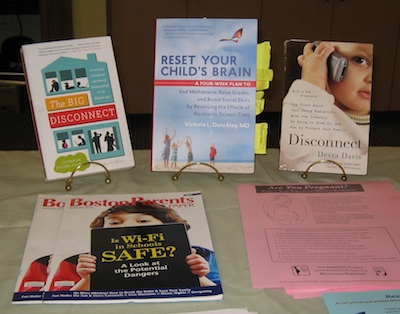 Comments and questions from the audience indicated most feel that health issues and cellphones should be addressed.

One resident said foot-dragging by the government on cellphone dangers appears to be a replay of its delay inrecognizing that smoking was a health hazard.

Studies published as early as 1939 showed the dangers of smoking but it was not until 1964 that the U.S. Surgeon General made a finding to that effect and ordered warnings to be put on packs of cigarettes.

Others pointed out simple precautions that can be taken including holding a phone no closer than ten inches to the body; putting it on airplane mode when not in use; not allowing children under 13 to have one; not using it in a car or moving vehicle; unplugging a cellphone base at night, and having a wired computer, keyboard and mouse.

One attendee said the theme of the film should be that money can buy just about anything.

Cecelia Doucette, a campaigner for Wi-Fi safety, said the database of the National Institutes of Health has thousands of studies that link electromagnetic fields with health hazards.

She urged those in the audience and others to obtain the book, “Captured Agency: How the Federal Communications Commission Is Dominated by the Industries it Presumably Regulates” by Norm Alster.

Doucette, formerly a grant coordinator for Ashland Public Schools and president of the Ashland Education Foundation, is working with state Senator Karen Spilka, D-Ashland, to pass legislation to create a special commission to study the health impacts of electromagnetic fields.

A story on her quest appeared in the July 27, 2015 MetroWest Daily News.

Others in the audience said that there should be no suppression of evidence related to health issues, cellphones and other devices that emit radiation. They also said that the U.S. seems to be behind other countries in acknowledging the health threats of cellphones. Wi-Fi has been banned in pre-schools in France, said one resident.

The burden of proof in this matter should not be on the public but on government, was another comment.

“Resonance: Beings of Frequency” is the topic of the next meeting on cellphones which will be Feb. 11. It contends that people “need to be aware of the adverse health effects so we can have the choice of take precautions against the exposures.”