A group concerned with the dangers of radiation from cellphones, computers and other sources has asked Sari Feldman, president of the American Library Assn., to spread the word on “an emerging public health crisis, a five-alarm fire.”

Writing yesterday to Feldman was Diane Hickey, co-founder of the National Assn. for Children and Safe Technology.

Hickey describes an “Appeal” signed by more than 215 international scientists and engineers to the United Nations, its member states, and the World Health Organization that calls exposure to microwave radiation from wireless routers, devices and equipment “an emerging public health crisis causing DNA damage and premature death.”

The letter says there are decades of science, with studies numbering in the thousands, that “document the health hazards attributed to wireless radiation.”

Children, she says, are unwilling victims of the radiation in classrooms and libraries.

Bulletin: Dan Doctoroff, CEO of Sidewalk Labs, which is replacing 7,500 New York City phone booths with wi-fi kiosks, will speak Feb. 10 at 6 p.m. at New York University's Center for Urban Science and Progress, Brooklyn. EMF Safety and other groups say the kiosks emite excessive radiation. A petition has been sent to the New York State Attorney General asking for an injunction against the kiosks.

While other countries have taken note of the dangers of radiation, “In the U.S. we are reacting very slowly and, it appears, that required changes to public health policy may only occur through litigation.”

The ALA could be a “frontrunner by acting as a conduit for informing the public of the health hazards and providing library accessibility to those individuals sensitive to microwave radiation," she told Feldman. 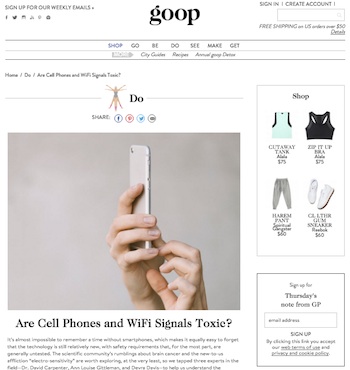 Goop, a website inspired by actress Gwyneth Paltrow, has comments from three experts on the question, “Are Cellphones and Wi-Fi Signals Toxic?”

Dr. David Carpenter says, “The strong evidence is that cellphone use results in brain cancer.” The other participants, Devra Davis and Ann Louis Gittleman are convinced that ubiquitous radiation poses dangers, especially to children.

Cecelia Doucette, a researcher on hazards of radiation based in Ashland, Mass., said the Ashland Board of Selectmen and Library Trustees approved a grant request for purchasing an Acoustimeter that residents will be able to borrow to measure and remediate Wi-Fi radiation in their homes, offices, schools and places of leisure. The library on Jan. 26 hosted a two-hour program including a film on the dangers of Wi-Fi, cellphone and other radiation.

Radiation from cordless phones, which transmit continuously, is singled out as particularly strong and dangerous.

Neighbors Can Be a Problem

Doucette says that eliminating or cutting down on radiation sources in one’s home still leaves the problem of a neighbor with strong radiation-emitting devices.

“Comcast/Xfinity has put public hotspots on their routers which throw the signal beyond one’s home so anybody can piggyback off your router from the street, bathing everyone in the vicinity with more Wi-Fi radiation. It slows down your home router," she said.

The San Francisco Giants baseball team, which plays in AT&T Stadium, is installing with the help of AT&T 1,700 powerful Wi-Fi devices under seats which will make it the most Wi-Fi wired sports park in the U.S. This will give unsuspecting fans the "hot squat," say critics.

Fletcher Cook and Steven Schwadron, AT&T corporate PR contacts, have been emailed questions about the safety of the radiation that will result from the installations but have yet to reply.

Precautions That Can Be Taken

The severity of dangers of radiation is a topic still under discussion but individuals can take steps that reduce the suspected health hazards:

• Keep cellphones 10 inches from face
• Wash face after computer use (electrons are sticking to face)
• Unplug cellphone base at night
• Keep phone on airplane mode most of time
• Don’t sleep near cellphone that is “on”
• Don’t carry cellphone in pocket
• Have wired computer, mouse, keyboard; don’t use laptop keyboard
• Keep face three feet from computer monitor
• Don’t put laptop on lap
• Don’t use cellphone in a car and especially a moving car or vehicle since phone will work extra hard to bring in signal
• Only use cellphone where there is a strong signal
• Don’t let children under 13 use cellphones except in emergency (skulls are thinner than adults)

Wi-Fi equipment in schools, libraries should be replaced with wired equipment.


if you are an office worker in cubicle, make sure your head, if against a partition, is not up against the back of a computer; Children under 13 should not put Virtual Reality devices on their heads.