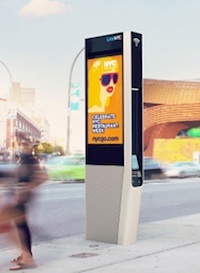 The dangers of excessive Wi-Fi radiation will not be among the topics discussed when Sidewalk Labs CEO Dan Doctoroff talks Feb. 10 about the ongoing installation of 7,500 high-powered Wi-Fi kiosks in New York City.

Jennifer Cho, director of development, NYU’s Center for Urban Science & Progress, Brooklyn, said the program will discuss new technologies that will improve the life of city inhabitants. There will be a Q&A period in the hour-long program but no duration has been set for that.

Activists have asked for a “literature table” where documents on the health effects of radiation can be displayed. That will not be allowed, she said. Also rejected was the suggestion that the program be moved to NYU’s Kimmel Center in New York.

Formation of Sidewalk Labs by Google, a $200 million project, was announced June 10, 2015. It included the following paragraph.

“We are at the beginning of a historic transformation in cities. At a time when the concerns about urban equity, costs, health and the environment are intensifying, unprecedented technological change is going to enable cities to be more efficient, responsive, flexible and resilient. We hope Sidewalk will play a major role in developing technological products, platforms and advanced infrastructure that can be implemented at scale in cities around the world.”

Fry Our Brains As We Walk

Critics of the installations say the “corporatese” expressed above masks what is being done—“frying the brains and bodies of people walking by these radiation-emitters.”

Truly educational programs, they say, include the six-part series on radiation dangers conducted by the Ashland, Mass., library from Oct. 8, 2015 to Feb. 11, 2016 and the Feb. 16 program to be conducted by Dr. Joel Moskowitz, director, Center for Family and Community Health at University of California Berkeley School of Public Health.

“In May of 2015,” says the program, “more than 200 scientists signed an appeal which was then submitted to the United Nations WHO and UN member states. These scientists have collectively published over 2,000 peer-reviewed papers on the biological or health effects of non-ionizing radiation, part of the EMF spectrum that includes Extremely Low Frequency Fields (EMF) used for electricity, or Radio Frequency (RFR) used for wireless communications.

Alternatives such as wired devices are being urged that would “substantially lower human exposures to non-ionizing radiation.” smartmeters.org is distributing cards that warn of the dangers of Wi-Fi and other radiation. 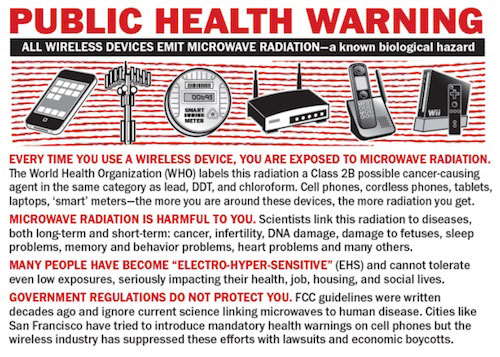 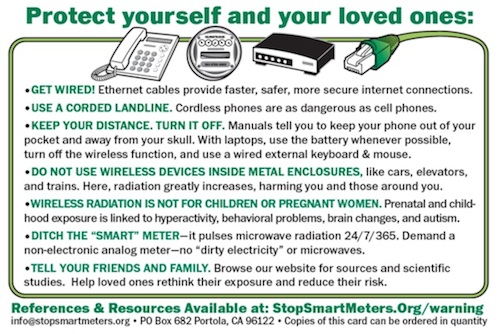