Students, among the biggest victims of excess Wi-Fi radiation, are starting to speak up. Kill Zone USA notes there are now 594,309 cell towers emitting pulsed radiation. Wireless burglar alarms are a no-no.

A high school student asked the Montgomery County Board Feb. 9 how it could allow virtually every classroom to have Wi-Fi connected computers at each desk “turning the school into a giant microwave” when the wired option makes this “simply unnecessary.”

“I feel extremely uncomfortable going to school every day, supposedly a safe haven, and seeing my friends sitting directly under the transmitters,” she said. “Renowned scientists all over the world have shown the possible side effects of radiation including brain cancer, tumors, blood/brain barrier deterioration and other effects,” she added.

“It is a violation of the rights of students and teachers,” she said.

Also on the same posting of Safe Tech for Schools Maryland are videos of mothers and fathers asking for the schools to switch to wired equipment.

Students at a high school in Ottawa have petitioned the government to remove Wi-Fi from schools. They have the support of Frank Clegg, president of Microsoft Canada for 14 years who is now CEO of Canadians for Safe Technology.

“The Parliamentary Health Committee has already heard evidence and unanimously agreed that more caution is required particularly in schools, so I agree with the students it’s time the Prime Minister makes the health of every student in Canada a higher priority,” he said. 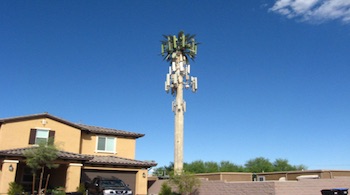 “I did not consent to this level of risk,” said Apurva Dixit, a high school student in Mississauga. “The school board has been informed that our Wi-Fi system puts us at risk of infertility and breast cancer but it’s choosing not to protect us,” she said, noting the World Health Organization classifies radiation from Wi-Fi and cellphones as a “Class 2B Possible Carcinogen.”

Not included are millions of Wi-Fi antennas nor the “huge number of military and other radar installations.”

New York City is one of the most heavily radiated cities, says Kill Zone. Within one square mile of City Hall in New York, there are 1,248 wireless antennas. Times Square has 178 cell towers and 2,510 antennas.

Kill Zone quotes New Networks Institute as saying, “This is only a fraction of the antennas and cell sites in Time Square since neither Verizon or the Federal Communications Commission has any complete data or documentation about the number of lines or even wireless cell sites.

“Australia’s safety agency says there’s no evidence of harm, but that’s not the same as saying it’s safe,” says ABC-TV description of the program’s position.

Among those quoted is Devra Davis, Ph.D., an epidemiologist who has called on schools to switch from wireless to wired web access.

Dr. Darren Saunders, of the faculty of Medicine at University of New South Wales, called the program “scaremongering and pseudoscience” and a “train wreck.”

“In terms of the way the story was reported, there was very selective reporting of existing data, sensationalist headlines, and experts with potential conflicts of interest,” he said.

Electricsense.com says that wireless burglar alarms are dangerous because they use the same type of radiation emitted by cordless telephones. Such devices give out electromagnetic radiation 24/7, says Lloyd Burrell, who operates the site.

Bellringer, alarm systems, Long Island, said about 65% of its 9,000 customers use wireless. Some use both wired and wireless, it said.