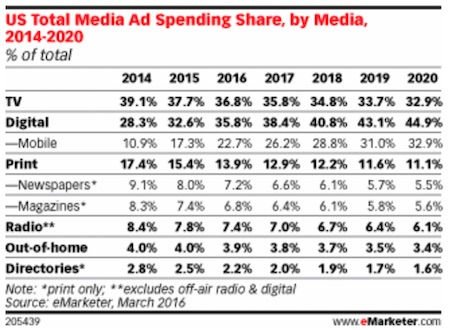 Next year, digital ad spends are expected to surpasses television for the first time, according to a new quarterly ad spending forecast by digital market research company eMarketer.

eMarketer now predicts TV to grow by 2.5 percent this year, a lower forecast than its previous 4.5 projection for the medium during 2015’s third quarter. eMarketer projects that TV ad spending will to continue grow by about only 2 percent a year, and predicts that TV will fall below one-third of total media ad spending by 2020.

In the digital realm, eMarketer now projects that total digital ad spending in the U.S. will increase by more than 15 percent this year. A sizeable portion of this is due to continued growth in mobile, which will surge 38 percent to account for nearly $44 billion.

The Standard Media Index, the industry standard for ad spend data, recently reported that digital media ad spends in January climbed 16 percent compared to the same period the year prior, and now account for 27 percent of all ad spending.