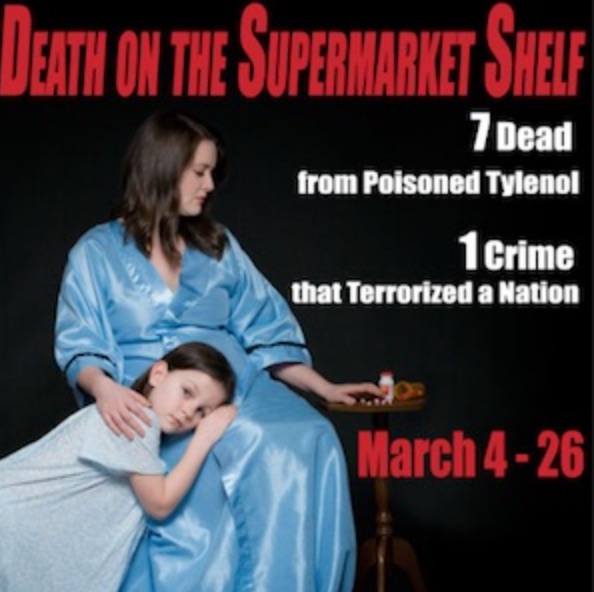 “Death on the Supermarket Shelf,” a play about the seven Tylenol murders in the Chicago area in 1982, is running from March 4 to March 26 in Federal Way, Wash. The crime remains unsolved. No blame has ever attached to Johnson & Johnson, maker of Tylenols.

Author Alan Bryce says his play “is a real life murder mystery with a darkly disturbing backdrop of corporate intrigue. It shows Michelle Rosen, the child of victim Lynn Reiner, who had just given birth, still in relentless pursuit of the truth."

Michelle, who was eight at the time, watched her mother die in the dining room after taking Tylenol capsules that she had obtained from the hospital pharmacy.

“Six more deaths were reported,” said Bryce. “What followed was a nationwide panic that altered consumer confidence forever. It stopped the nation in its tracks. But it’s more than that. I discovered a story of evil, corporate villainy, human stupidity and human dignity that took my breath away.”

“I invented nothing,” he said. “Everything on stage happened in fact. There are compromises, of course, that I had to make to collapse a 34-year-old story into two hours. But the play is essentially what happened.”

J&J, which declined to hold a press conference on the murders, was able to deflect suspicion from itself. It took the position that it had no knowledge of what happened. It only offered a $100,000 reward because to do otherwise would be to admit responsibility. Media have been virtually unanimous in praising J&J for "openness" and for adept handling of the crisis. PR for tylenol was called "Exhibit A in the lesson book on forthright crisis management" in a New York Times feature Aug. 21, 2010 by Peter Goodman.

Critics, including Scott Bartz, seven-year employee who authored The Tylenol Mafia, a 500-page volume, contended there was plenty of proof that the Tylenols were poisoned while in the distribution chain of J&J and that the murders were not the work of a “mad person” running from store to store. Given the fact that shelves usually contained two dozen Tylenol bottles, the odds were overwhelming that hundreds of poisoned bottles were on shelves of scores of stores in order for seven people to be killed by the cyanide poison in a two-day period, Bartz reasoned. This pointed to contamination during the distribution process, he wrote. The NYT has never mentioned the existence of the Bartz book but Wikipedia has.

Proof cited was that Lynn Reiner obtained her poisoned Tylenols from a secure hospital pharmacy.

J&J fought the family in court for eight years before making a settlement on May 23, 1991, a day before a trial was to begin. The company has refused to discuss anything about the murders for decades.

The play has a cast of 12 plus an understudy. Singers perform the music of blues legend Robert Leroy Johnson (1911-38). They serve as “an unusual kind of Greek chorus throughout,” says Bryce, “an innovation that gives this production a hauntingly dramatic appeal.”

Sarah Henly Hicks plays Michelle Reiner as an adult and Cora Pearlstein plays her as a child.

Dale Bowers plays J&J CEO James Burke, who led the company in the re-introduction of Tylenol Capsules five weeks after the murders. A press conference was held for that purpose. The capsules, susceptible as ever to doctoring, were said to be in “tamper-resistant packaging.” Flaws in such packaging resulted in another murder via poisoned Tylenol capsules on March 17, 1986. The victim was 23-year-old Diane Elsroth of Peekskill, N.Y.

Burke then said he was sorry that Tylenol was again sold in capsule form. After the Elsroth murder, only tablets have been used for Tylenol.