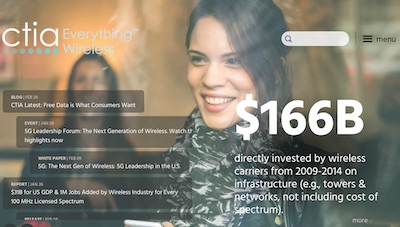 The cellphone industry is battling Berkeley, Calif., which wants prominent warnings that say the phones should be kept away from the body and especially the head.

CTIA-The Wireless Assn., previously called the Cellular Telephone Industries Assn., has gone to court against Berkeley, Calif., to block the city’s cellphone “right to know” law that was passed in May 2015. It is to take effect March 21.

A preliminary injunction against the law was issued by a Federal District Court last September pending removal of the sentence, “This potential risk is greater for children.”

The injunction was lifted after that sentence was removed.

CTIA's slogan is "Everything Wireless." Its website notes the industry spent $166 billion on cell towers and networks from 2009-14. There are currently 594,304 cell towers in the U.S., many of them in residential districts, according to thekillzones.com, which says they are a major health hazard.

The Assn. of National Advertisers on March 7 joined CTIA in seeking to block the law that forces disclosure of possible radiation hazards to users.

Those who buy or lease phones would be told: “To assure safety, the Federal Government requires that cellphones meet radio frequency (RF) exposure guidelines. If you carry or use your phone in a pants or shirt pocket or tucked into a bra when the phone is ON and connected to a wireless network, you may exceed the federal guidelines for exposure to RF radiation.

The ANA says Berkeley should buy broadcast air time or public service announcements about the warning and put posters on city buses and rail cars and use outdoor ads near cellphone stores to get the message across.

The Berkeley website says the city is a "center for academic achievement, scientific exploration, free speech and the arts" and that although it is small in size, it has a "big reputation."

Electricsense.com has one of the most complete lists of do’s and don’ts to avoid excessive radiation exposure from phones and laptop computers.

1. Electric Fields. More and more people are turning towards using laptops and tablets, so laptop radiation is increasingly becoming a problem. There are several issues here, the first one is electric fields:

As my tests show the best way to cut down on your exposure to electric fields from your laptop is to use it on the battery instead of the main power supply.

2. Magnetic fields. All computers as soon as they’re switched on also generate magnetic radiation or magnetic fields. These exposures can be significant particularly if you’re using a laptop or computer tablet in close proximity to your body.

3. Radio frequency radiation. The third issue is RF radiation since most computers now have WiFi functionality. This means you’re being exposed to another layer of electrosmog from two sources.

Firstly from the laptop itself; most laptops are configured by default to be in WiFi mode, so even if you are on a hard wired Ethernet connection your laptop is still emitting and receiving RF radiation. Secondly there is the RF radiation being emitted by the modem/router as shown in this video:

Be careful because many modem/routers are now factory configured to automatically re-enable WiFi when they receive an update – this can be several times a day. So even if you disable the WiFi in the settings menu it may be subsequently re-activated without you knowing.

The best solution is to replace your WiFi installation with a hard-wired Ethernet connection and make sure the WiFi function is disabled. I recommend the TP-LINK Wireless N300. It’s very reasonably priced and it’s got some excellent 5 star reviews on Amazon. It is a wireless router but it’s got a WiFi on/off button built into it’s hardware. This means you can easily switch the WiFi function off and it stays off.

If your Internet is supplied by cable you need to buy a wired cable modem router.

Laptops are not for laps. The best way to minimize laptop radiation is not to use your laptop computer on your lap. Studies show that over time using your laptop on your lap can significantly decrease your sperm count.

Use your laptop on a desk or other surface away from your body. There are some good laptop radiation shields on the market but some laptop shields only shield RF radiation (which is not a problem anyway if you disable the WiFi) and some offer no protection from magnetic fields. The laptop shield I recommend is the Elite Harapad. According to the manufacturer it gives over 100% protection from magnetic fields.

5. Computer monitor radiation. On a desktop computer the biggest problem is often the monitor, not the CPU, primarily because the CPU sits further away. Reduce your exposure by sitting further away from your computer screen. This will reduce your radiation exposure, especially if you sit at least three feet from the screen (not too far to avoid eye strain) – EMF exposures decrease significantly with distance. If you’re using a desktop computer you can use a computer radiation filter over the screen or better still purchase a degaussed screen.

6. Introduce houseplants. Those of you who enjoy houseplants will be happy to learn that some cactus plants have the ability to absorb the electromagnetic radiation coming from the computer. It was actually NASA who discovered this and ever since Cactii have become my best friend; I have lots of cacti in my office. Put some cacti around your computer.

7. Use a natural crystal salt lamp. I’ve had one in my office for a long time. They release negative ions in the air thereby creating an effect similar to an ionizer. These negative ions supposedly help cancel out the electromagnetic radiation being emitted by your computer by helping to maintain a normal ionic balance in the air. What the exact effect is regarding EMFs is difficult to know, but what is sure is that they bring your office environment closer to nature.

8. Take regular breaks. If you use a computer for several hours a day then you’re probably all too familiar with the phenomenon of eye strain. Computer screens not only cause eye strain but the electromagnetic radiation also causes dryness and irritation.

Take regular breaks, get out of your chair away from your computer every 20 minutes or so. You can also help to counter damage and irritation to your eyes by adding bananas to your diet. Bananas contain significant amounts of potassium which will benefit the health of the eyes.

9. Antioxidant food. Much has been said about the value of antioxidant foods in keeping us healthy generally but these foods can also help to deal with free radicals caused by computer radiation.

Tomatoes, cherries, apples, broccoli, and carrots all contain significant amounts of vitamins A and C. These foods supply your body with the raw materials it needs to create its own natural form of EMF protection.

10. Wash your face. Your face is usually the closest part of your body to the screen, and the particles of radiation can attach themselves there.

It might come as a surprise to you to learn that simply washing your face after using the computer can remove the radiation that has settled there.

Even if you are using a laptop, using a wired external keyboard and wired mouse will significantly reduce your exposure to the EMFs emitted by the electrical components situated under the keyboard of the laptop.

12. Other People’s Computers. It’s not just your computer you need to be wary of it’s other people’s as well. If you work in an office where there are several computers make sure you are not in close proximity (6 feet) to the back of someone else’s PC screen, and make sure you are not sat in close proximity to the office modem/router or any other electrical device which may be a major source of EMF exposures.