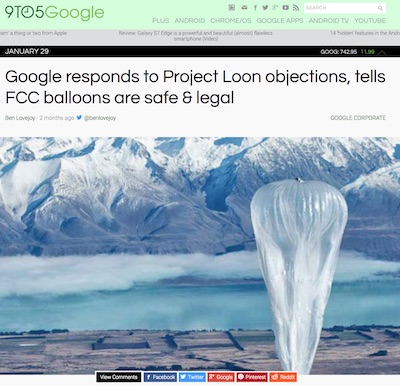 The Federal Communications Commission on March 17 gave Google permission to float high-altitude balloons that provide Wi-Fi in 50 states. Anti-Wi-Fi groups say they are dangerous but Google denies all such charges.

Google said it respects the concerns of the critics but says “there is no factual basis for them.” Loon will comply with all existing technical rules governing radio transmissions, and the power levels used will be well below legal limits, said Google. It has taken “extensive steps” to guard against interference with other wireless activity.

The company plans to conduct tests in all 50 states for a period of two years. A Loon balloon landed in Sri Lanka Feb. 17, 2016. The company said it had completed its test mission.

Global Union Against Radiation Deployment from Space says it gave FCC evidence that the Loon experiments in the U.S. would “violate human rights and harm human health and the environment.”

The company’s application to the FCC gives it permission to float the balloons at any time or continuously. That will “pollute public and private environments indoors and outdoors with microwave radiation” and does not include any requirement to tell people in the area who will be so exposed, GUARDS said.

FCC’s RF limits are based on the premise that if there is no heating damage to human flesh there are no biological effects, the group says. It quotes the 2012 BioInitiative Report that says the duration of exposure of non-ionizing radiation can cause harm to human tissues.”