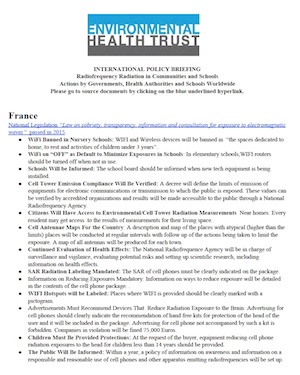 Wi-Fi pollution is “Canada’s worst crime ever against humanity” but scientists, doctors and the “sinfully silent news media” are failing to warn the public, says WF health advocate Jerry Flynn.

Flynn, retired Canadian Armed Forces captain who spent 22 years in its “Electronic Warfare” unit, said scientists have known for more than 50 years that wireless products are not safe.

Programs on the hazards of cellphone radiation are "all over the TV news at least in Europe and Australia" but media ownership in North America, which is in the hands of "a few multinational corporations," are mostly ignoring the subject, he said.

"Virtually the entire global population will be irradiated by 24/7/365 by 2020 whether they like it or not by pulsed, non-thermal microwave on the same frequency as microwave ovens--2.4 Gigahertz," said Flynn.

The "world's first Wi-Fi conference" is set for April 19-21 in Tysons Corner, Va. Thousands are expected to attend "Wi-Fi Now 2016." Main sponsors are Samsung, Oracle and WiFIForward. More than 40 other sponsors are listed. Speakers are from Time Warner, T-Mobile, Google Access and other major companies.

More than 7,000 attended the annual International Wireless Communications Expo in Las Vegas from March 21-25. There were more than 370 exhibits and nearly 200 speakers. The slogan of the wireless industry is "Everything Wireless." It has been held since 1977.

Said Flynn: “It is preposterous but tragically true that scientists and informed people around the world fear that today’s ongoing pandemic corruption, suppression of the truth, deception and lies, aided by a sinfully silent news media—unless it somehow can be stopped—will bring about the demise of mankind and all life on earth as we know it!”

Flynn said Canada’s only hope rests with the Canadian Medical Assn. and its provincial chapters.

“The corrupt authorities now in Health Canada, Industry Canada and elsewhere must be routed and held legally accountable. It simply boggles the mind that such a thing could possibly be happening in Canada—all because governments everywhere refuse to learn from the previous tobacco, asbestos, Thalidomide, etc., debacles!” he said.

Flynn said, “Canadians are being lied to about the alleged ‘safety’ of low-intensity, pulsed, non-thermal, non-ionizing radio frequency radiation which is emitted by all of today’s consumer wireless products as well as wireless ‘Smart’ utility meters and appliances.”

Flynn said the Canadian government is “blind to the decades-old corruption that is ongoing within the Minister of Health’s radiation protection bureau. Tragically for all persons living in Canada, our provincial governments have show themselves to be willfully silent to those of us who have made many attempts to alert them over the years.”

“Despite an ever-growing mountain of compelling, peer-reviewed evidence amassed from scientists around the world since the 1950s, Canada’s news media chooses to remain largely silent,” he added.

“For that reason, it behooves Canada’s doctors and nurses to use their national organizations to notify the Prime Minister and Minister of Health, personally, of this outrageously evil crime against humanity!”

The mysteries of the electromagnetic spectrum are such that few people understand it, Flynn said. Governments and media are needed to step in and fill the void.

The Soviets, Flynn noted, irradiated the U.S. Embassy in Moscow from 1953-1976 for 6-8 hours a day using frequencies between 600 megahertz and 950 megahertz emitting power 1,000 times weaker than most of today's international "safe" standards. Despite the low dosage, two ambassadors died of brain tumors, a third contracted leukemia-like symptoms and died, and at least 16 female staffers developed breast cancer. Many other staffers had various illness, said Flynn.

Cellphones use frequencies in the 900 MHz range and wireless utility meters are at the 910 MHz level. "Scientists note that harmful effects of EMF are cumulative and can take from 10 to 40 years before an illness becomes apparent," said Flynn.

Covered are policies relating to exposure of children to Wi-Fi and other sources of radiation; cellphone tower emission standards; mandatory radiation labeling; publicizing of Wi-Fi “hotspots”; publication of cell antennae maps for the country; informing schools of the health dangers of EMF; advertising bans in some countries, and passing “Cellphone Right to Know” legislation.