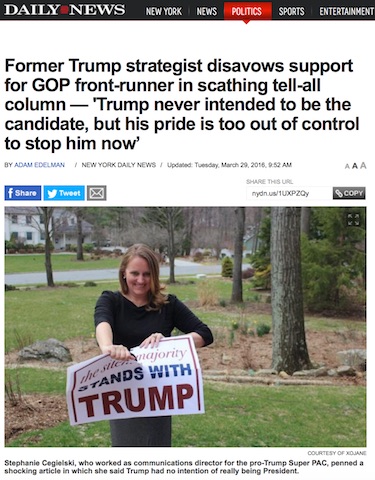 Stephanie Cegielski, ex-VP-PR/PRSA, who headed a super PAC supporting Donald Trump, has stunned the political world by denouncing him at great length—recalling what Scott McClellan did to President Bush in 2008.

McClellan, who was Bush’s press secretary, wrote, according to Politico, a “scathing” and “harsh” description of his former boss’s administration in a 341-page book called What Happened: Inside the Bush White House and Washington’s Culture of Deception.

Cegielski, a 2006 graduate of the University of Denver Law School, worked in PR at PRSA for three years until she was fired upon arriving for work on Monday, July 27, 2015 by recently appointed CEO Joe Truncale.

“I am now taking full responsibility for helping to create this monster—and reaching out directly to those voters who, like me, wanted Trump to be the real deal,” she said in a release. At least a dozen media picked it up, giving it major play. 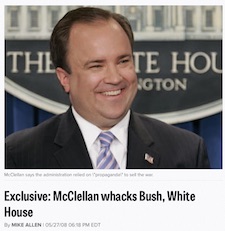 She charges that Trump was not a serious candidate at the beginning and surprised himself when he found so much support by the public. “He certainly was never prepared nor equipped to go all the way to the White House but his ego has now taken over the driver’s seat and nothing else matters,” she wrote.

A Trump spokeswoman denounced Cegielski, saying “She knows nothing about Mr. Trump or the campaign and her disingenuous and factually inaccurate statements in no way resemble any shred of truth. This is yet another desperate person looking for their 15 minutes.”

The full Cegielski “Open Letter to Trump,” running to nearly 2,000 words, was placed on XOjane.com.

She expresses her belief that “Trump is simply a television ‘character’ whose 2016 bid is merely an extension of his TV and real estate-fueled celebrity.”

During her three years at the PR Society, Cegielski worked with Yann and CEO Bill Murray to enforce the boycott against the O’Dwyer Co. which blocks the company from exhibiting its five informational products at the Society’s national conference. Murray resigned in March 2014 when there were eight months remaining on his contract.

Laura Kane, who was named chief communications officer of the Society earlier this month, has continued to enforce the O’Dwyer boycott, refusing to respond to phone calls or emails.

She spent most of her career, from 2003-2014, with Aflac insurance in Atlanta, rising to VP-corporate communications. She was at Marsh (insurance) in New York from October 2014 to March 2016 (18 months) as global head of media relations and external affairs.