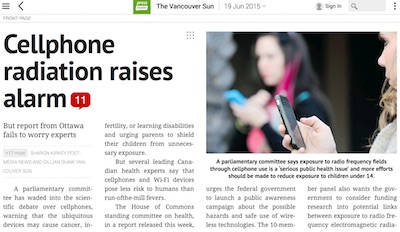 She is publicizing the validation of her illness by a Canadian Parliamentary committee in any way she can. Among those resisting her message is the BC Teachers Federation which will not publish her letter.

After years of a “media blackout” on the subject, articles have run in the Vancouver Sun and The Province, she notes, expressing the hope for more such articles.

Plant’s letter in its entirety is below.

I am a very recently retired electromagnetic hypersensitivity (EHS) teacher from British Columbia.

I have avidly followed the HESA April 28th meeting minutes, and also read and eagerly circulated the outstanding June 2015 report to Parliament entitled "Radiofrequency Radiation and the Health of Canadians."

In fact, I carry a paper copy of the April 2015 HESA minutes and the June 2015 Report in my purse at all times. I have HESA to thank for validating my illness and giving me credibility in my battle against WiFi and RF, because in BC there are no doctors trained to do thisI

I have now exhausted all my connections and contacts at this point. I have been trying in earnest for five years to appeal to the schoolboard, the 63 school superintendents in BC school districts, and other powers-that-be, to remove toxic WiFi from our schools. I have been restricted in the past by school policy and union protocol, but the restrictions are now lifted.

I am a “Canary” Spotlighting Danger

I am one of those canaries whom Dr. Riina Bray speaks of in the minutes of the April 28th meeting of HESA...I have extreme EHS. I was healthy and led a normal life until shortly after WiFi was installed at our school site in 2010. Formerly a Delta teacher for 25 years, I was forced onto Medical Leave this fall due to WiFI signals becoming intolerable, and my symptoms near WiFi was excruciatingly painful to endure.

I chose Early Retirement after my 55th birthday in December 2015, and retired just last month. I have way too much energy, enthusiasm, experience, and love for teaching to be retired. Sigh.

Today I am submitting to you a letter I wrote to the BC Teachers Federation in the fall of 2014. I hope it will add to the increasing evidence in support of your important report and message. The letter is in fact an article I had submitted to the BC Teachers Federation for publication in Teacher Magazine two years ago. They have not yet published the information - I am told this is due to the controversy it might stir.

Since I was recently left with no alternative, due to increasing WiFi sensitivity at school, but to retire from my school district in Delta, I am free to release this information to the public...so I will be contacting the media to publish the article instead.

Several teachers in different BC locals as well as from other provinces in Canada are collaborating to contact our new Health Minister with information on WiFi health effects in an effort to stop the insanity!

The situation is out of control in our public schools right now, with the layering of multiple sources of radiation exposure from WiFi routers and boosters, laptops, iPads, and the hundreds (sometimes thousands) of strong iPhones actively in use daily in every public school.

In light of recent developments in the east, with two Ontario unions requesting that WiFi be removed from their schools due to teachers who are developing EHS symptoms and the subsequent lift of the media blackout here in the west (the Vancouver Sun and The Province covered the Ontario story after years of ignoring WiFI issues and Resolutions against its use here within the BCTF), it seems a fitting time to send my article to our local media, outlining my recent lengthy battle with the schoolboard regarding strong WiFi systems in our district.

[Here is link to Vancouver Sun story which reports that while HESA finds that Wi-Fi and other radiation sources are a threat to health government officials do not].

My rapidly developing EHS symptoms and strong reactions to radiowave frequency radiation forced me out of my townhome and into early retirement on March 1st this year. We, the EHS, are being robbed of our rights and freedoms. I am now unable to participate in a formerly active, robust lifestyle, hike or jog in public parks, use transit, walk my dog on public sidewalks to run errands - all due to increased sensitivity to powerful EMF from powerlines, residential mobile phone use, home WiFi upgrades and boosters surging through neighbourhoods, and Smart Meter RF at street level. This is a basic Human Right to "clean air" that has been stolen from us.

Due to sensitive skin, allergies and MCS (multiple chemical sensitivities), I am part of that growing group that is predisposed to become EHS. Symptoms began to emerge and develop only after lengthy and prolonged exposure to strong RF's emitted by WiFi signals and routers in my classrooms and hallways. I have no RF in my own home, having never subscribed to home WiFi, mobile phone service, or Smart Meters.

I am not suffering alone - my experience is not unlike that of thousands of other teachers and students in public schools throughout BC and Canada.

Please use any connections you might have to help circulate this information, in order to effect change in federal policy on WiFi use in public spaces and places such as schools, parks, public transit including ferries, and buildings which are now toxic to the increasing number of Canadians who are EHS.

I thank you for your compassion and support.