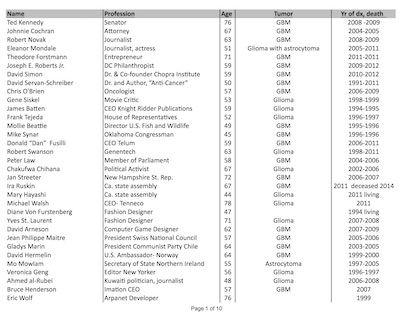 The list of 300+ victims has been compiled by Ellie Marks, head of the California Brain Tumor Assn., whose husband, Alan, survived a brain tumor in 2008. He had been wedded to his cellphone for 20 years in conducting a real estate business.

Their son, Zack, was interning for Senator Ted Kennedy when he was diagnosed with brain cancer, succumbing in 2009.

One person we would add to the list is Marilyn Laurie, VP-PR of AT&T, who died of brain cancer in 2010. We queried AT&T PR staff about her cellphone use but never heard back.

Cellphone alarmists have been shouting their message for nearly ten years but are making little headway with the media, legislators or the general public.

Harper’s in 2010 warned of a brain-cancer epidemic in 2010 with a ten-page story headlined, “For Whom the Cell Tolls.” It quoted Cindy Sage and other EMF health advocates as saying that the lobbying and advertising power of the telecom industry was frustrating those who want the public to be aware of the dangers of radiation from cellphones, computers, Wi-Fi, cell towers and other sources.

Matthew Waletzke, “toxic exposure” specialist who came to our apartment in March, was the subject of a 3,047-word feature in the May 26, 2010 New York Times.

He analyzed chemical, water pollution, radiation and other hazards in an East Village apartment. He advised the occupants against having a cordless phone, wireless internet, dimmer switches or using cellphones. The apartment’s microwave oven sent Waletzke’s meter into the red “danger” zone even when eight feet away. Laptop computers should never be put on laptops, he advised.

Waleltzke’s visit to our apartment, where his meter soared to the 10,000 microwatts per square meter level near some of our ten five-foot high by 38-inch-wide windows, only registered in the safe zone (250-500 microwatts) in the foyer and bathroom. We have since purchased an Acoustimeter to measure radiation and are taking steps to block it.

Eleven survivors of brain cancer are on Marks’ list including actor Mark Ruffalo, who was operated in 2001 for acoustic neuroma, a non-malignant cancer of the inner ear. Symptoms were facial paralysis and a partially closing eyelid.

Family and friends of former Met Star Tug McGraw, who died at age 59 in 2004, started the Tug McGraw Foundation for people with brain-related trauma and tumors. 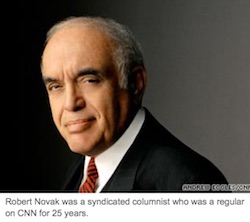 Marks notes that her linkage of cellphone usage and brain cancer, with a few exceptions, is not based on testimony from any of the families involved.

Cellphones, she notes, came into popular usage in the mid-1980s and the apparent increase in brain cancer started in the mid-1990s.

The most common type, which she gleaned from obits and other public sources, is glioblastoma multiforme cancer (GBM). Also common is glioma.