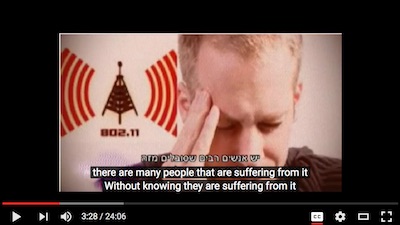 The prime time Israeli TV program on the dangers of radiation from Wi-Fi, cellphones, computers, cell towers, etc., a subject that has evaded U.S. TV, has been given English subtitles and transcribed.

The subtitles are accessed by clicking on “cc” at the bottom right of the screen.

An English translation is here.

Theme of the half-hour April 12 program titled, “How We Are Killing Ourselves—Wireless Radiation,” is that electro-magnetic radiation, even though it may not heat the body, a “floor” specified by government bodies, it is still dangerous and there is copious evidence that many people are suffering from its effects.

She had been suffering from headaches, fatigue, sleep problems, rash, heart flutters, difficulty concentrating and “an overwhelming sense of needing to leave some classrooms,” said her mother, Debra Fry. At one point she had a “really bad nose bleed” while trying to do homework.

Attempts to convince school officials of the dangers of Wi-Fi and computers went nowhere, says Debra Fry. Some of Jenny’s symptoms disappeared when Wi-Fi was turned off at home and an Ethernet cable was used.

However, school authorities would not relent. The Rukus Zoneflex 7982 Wi-Fi at school brought back her symptoms.

Jenny's suicide may have been a desperate cry for help that went tragically wrong, her mother said, an attempt to get the issue of the WiFi in school, and the way that it was affecting her, taken seriously.

The program says more than 800,000 Israelis are suffering from different levels of radiation sensitivity but “only a few of them are aware of the problem.” There are a number of interviews with Israelis who describe their symptoms and interviews with scientists, professors and engineers.

Also quoted on dangers of radiation is Dr. David Carpenter, a graduate of Harvard Medical School who heads the Institute for Health and the Environment at the University at Albany, New York State University system.

He told the program that EMS hypersensitivity is “a real disease, one of a series of diseases called idiopathic environmental intolerance. Individuals who suffer from this syndrome can be extremely incapacitated. They basically cannot survive in modern cities.”

“It’s time to tell parents, ‘Don’t let your kid have a cellphone,’” he told the program. “Their skulls are thinner, their brains are smaller. Holding a cellphone to their heads exposes a greater degree of radiation than to an adult’s brain. 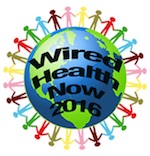 EMR health advocates, faced with lack of concern by local, state and government bodies, schools and libraries, national and local politicians, celebs of one sort or another, and virtually all media, need ways to energize the public on this issue.

The list compiled by Ellie Marks of 311 well-known people who contracted brain cancer, 300 of whom died, could open the door to greater public awareness. So far, almost none of the families of the victims are talking.

A prime prospect, it would seem, is the family of Tug McGraw, who set up the Tug McGraw Foundation after the New York Mets star died of a brain cancer in 2004 at the age of 59. 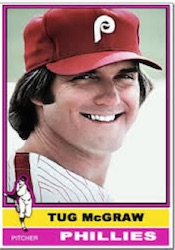 He was one of the all-time most popular Mets, creator of the “You gotta believe” slogan that helped propel the team to a National League pennant in 1973. We have emailed Jennifer Brusstar, president/CEO, and Elisabeth Ritz of Ritz Communications, Chicago, a board member.

Yankee Bobbie Murcer, who played for 17 years and then was a Yankee broadcaster for nearly 24 years, died at age 62 in 2008 after a 19-month battle with brain cancer. He was diagnosed in 2006 after experiencing a lack of energy.

Brian Hoch of MLB.com wrote an extensive article on one of the most popular Yankee stars. 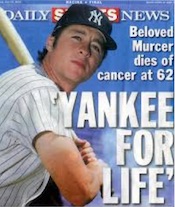 Whether Murcer was a cellphone user has yet to be determined.

Other sports figures who died of brain cancer include National Football League head Pete Rozelle, who died in 1996 at age 70, and golfer Seve Ballesteros, who died in 2011 at age 58.

Brain cancer is a rare disease. The chances of contracting such a disease in a lifetime is less than one percent—one in 140 for men and one in 180 for women, according to the American Cancer Society

The May 1 New York Times has a 12-page section on treatment of victims of Alzheimer’s disease by Nathan R. “Sonny” Kleinfield that does not mention cellphones, Wi-Fi, cell towers, computers, etc., as a possible cause of the brain disease. Kleinfield in a May 2 article said his mother was a victim of AD. He notes that drugs do not work "very well for very long" and that mild stages of AD can last for years.

EMF health advocates say failure to consider radiation as a possible cause is a major flaw in the article. NYT, like most media, has ignored the health threats of non-ionizing radiation from numerous sources.

Best-EMF-Health and other health-related websites find a connection between radiation and Alzheimer’s. Bioinitiative's 2012 report had this section:

Conclusion: There is strong epidemiologic evidence that exposure to ELF MF is a risk factor for AD. There are now twelve (12) studies of ELF MF exposure and AD or dementia which . Nine (9) of these studies are considered positive and three (3) are considered negative. The three negative studies have serious deficiencies in ELF MF exposure classification that results in subjects with rather low exposure being considered as having significant exposure. There are insufficient studies to formulate an opinion as to whether radiofrequency MF exposure is a risk or protective factor for AD.

The NYT article traces the experiences of Geri Taylor who was stricken at age 69 in 2012. One day she did not recognize herself in the mirror.

It tracks her treatment and those of others at health facilities and how their families are coping with the disease.

EMF health advocates say that devoting nine pages of text to the difficulties and tragedies of those stricken with Alzheimer’s and their families without examining possible causes of the disease, such as excessive radiation in the environment and suggesting solutions, puts NYT in the position of exploiting the victims of the disease rather than helping them.