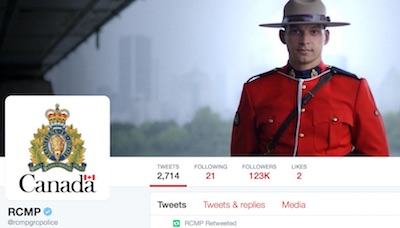 The Royal Canadian Mounted Police, famed worldwide as “rescuers” and titans of justice, has been summoned by Capt. Jerry Flynn (ret.) to rescue Canada from radiation pollution.

RCMP, also known as “the Force” and the “Mounties,” is a federal national police force that works on a contract basis with three territories, eight provinces, 190 municipalities, 184 aboriginal communities and three international airports.

He spent 22 years in electronic warfare and signals intelligence for the Canadian Armed Forces. For two years he was the sole EW officer charged with supporting the Canadian EW Company. He also worked closely with U.S. and NATO army EW units.

He says the RCMP “must be directed to conduct a criminal investigation into the industry’s stranglehold on Canada’s radio frequency electro-magnetic radiation and extremely low frequency scientific community beginning with Health Canada’s radiation protection bureau.”

Security of Canada and U.S. in Danger

“Canada’s National Security, like that of the U.S., is in grave danger because of its indefensible decision to employ wireless ‘Smart’ meters as the basis for its national electric power grid! Through their investigation, the RCMP will learn that no communication system in the world is more insecure and more vulnerable to attack than is a wireless radio system.

“Today’s pandemic corruption could not happen were it not for the sinfully silent North American media oligopoly, who have not allowed governments or the public to know that this same fight (against RF EMR and ELF EMFs) is also going on in European countries and Australia and has been for many years! Or that EHS is recognized in many countries of the world! Or that various countries have imposed the ‘Precautionary Principle’ in order to protect their people from today’s man-made radiation!”

Flynn’s letter to the Health Agency includes the following:

Just one former HC scientist, Dr. Michael Repacholi, played a key role in establishing RF radiation exposure ‘Guidelines, not just for Safety Code 6 (SC6) but also for two of the three international Regulatory Agencies: ICNIRP (International Commission on Non-Ionizing Radiation Protection), for which he was the inaugural chairman and is now chairman emeritus; and the WHO (World Health Organization)!

For at least the past 10 years, a second former HC scientist, Dr. Art Thansandote, has been – and still is – Co-Chairman of the omnipotent US Air Force and US Army-dominated sub-committee (TC95, SC-4) that establishes the USA’s RF ‘Guidelines’. Dr. Thansandote retired from HC in 2012!

In 2013, HC’s RF exposure ‘Guidelines’ were essentially identical to those of ICNIRP, WHO and the USA. Though reduced approximately 66x last year, SC6 (2015) ‘Guidelines’ are still considered to be dangerously high!

HC selected ‘elite’ ICNIRP scientists (remember Repacholi) known to have strong ties to industry to be members of its ‘independent’ Expert Panel, which was established to review the adequacy of SC6 (2013) RF exposure Guidelines!

HC’s Radiation Protection Bureau and their colleagues in the wireless and telecom industry and electric power utilities have successfully co-opted most, if not all, provincial and municipal governments, and provincial health officers (PHOs) into believing that both RF EMR and ELF EMFs are safe – neither of which is true!

HC, ICNIRP, WHO and the USA stubbornly recognize only THERMAL radiation. Their common mantra is: “If the radiation does not heat the skin, it cannot be harmful.” Consequently, the public in Canada and in other western countries are afforded no protection against today’s hazardous NON-thermal RF EMR!

HC, ICNIRP, WHO and the USA also refuse to recognize that ELF EMFs can be hazardous to humans and other life forms, especially when the exposure is constant! Consequently, the public in Canada and in other Western countries are afforded no protection against ELF EMFs!

HC, ICNIRP and the USA all refuse to recognize that electro-hypersensitivity “EHS” is a legitimate physiological condition, which a significant percentage of the global population experience when exposed to man-made ELF EMF and/or RF EMR.

The above amounts to the largest, most preposterously despicable crime against humanity in Canada’s (the world’s) history and must be stopped! By doing so, Canada’s National Security can be sensibly restored, as can protection for the health and safety of all people and other forms of life in Canada. Once the guilty parties have received their due justice and the media ownership issue has been satisfactorily addressed, Canada can once again claim to be a democratic country. But for any of that to happen, the truth must come out – NOW!