When food publicity guru Leo Pearlstein started Los Angeles-based Lee & Associates, Inc. in 1950, he never dreamed he would find ways to publicize every kind of food imaginable with the help of movies, TV, music, sports or political celebrities. After more than six decades of breaking the mold, he became known as the “food publicity pioneer.” Now he shares insight into the secrets behind his success, as well as a collection of rare photos of Hollywood celebrities, with his new 155-page paperback book, “Adventures in PR,” available on Amazon.

“My stories are about adventures that happened as a result of opportunities” said Pearlstein. “There were two types of opportunities. If something happened in the press, we would see if we could react with positive information that would be complimentary to our client. There were also opportunities that we could create by working with someone else and including their product information with our messages. We call them ‘tie-ins.’ We would share costs for media and production, or we would include their product in our recipes and they would include our product in theirs. We would both benefit with increased exposure without additional costs.”

From eggs and prunes, to turkeys, potatoes, chives, chickens and chips, the 95-year-old PR pioneer recalls the many trials and tribulations of getting hard-to-obtain media attention for his clients’ products.

Pearlstein’s publicity campaigns not only helped sell food, but also the TV and movie projects of the celebrities with whom he worked. The book not only describes many successful PR campaigns, but how Pearlstein and his staff were able to turn some crazy mishaps into successes.

“One of my most exciting celebrities was Jane Mansfield promoting turkey’s year round,” said Pearlstein. “We had an apron that said, ‘How about a turkey BBQ?’ The turkey growers were happy, because we got more publicity out that one photo than about a dozen other campaign tactics,” he noted. But one of the biggest setbacks happened when President John F. Kenney was assassinated.

“California was the second largest turkey producing state in the Union and it was our turn to send a turkey to the president for Thanksgiving,” he said. “We took a photo a week before and we were going to release the photo a couple of days before Thanksgiving Day. President Kenney was assassinated and we never released the photos. It was sad day and we didn’t talk about Turkeys all day. We spent a fortune on publicity lining up five TV shows, pictures, media kits, and other materials. We were doing a Thanksgiving dinner at every station in Los Angeles, we had a home economist, a chef and a dietitian with me. We were all set to go when a voice came over the loud speaker and said, ‘stop everything, President Kenney has been assassinated.’” 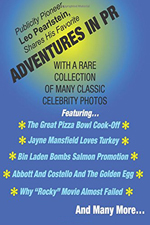 Pearlstein said the assassination was the most shocking event of his life. “We were all sick, we covered up the turkey and took all the food off of the table, and no one ate anything,” he said. “Since the news about Kenney lasted several weeks, I was able to take the same concept and turn it into Christmas. We didn’t talk about Thanksgiving and we were able to recoup some of the money and energy we had. It was one of the saddest things that ever happened and it wiped us of the map. We lost our radio shows and TV shows, because obviously, we weren’t going to talk about it.”

Pearlstein’s fourth book, “Adventures in PR” is as entertaining as it is useful for anyone attempting to promote products or services. It features tons of inside secrets, PR events and stories regarding food and celebs.

Pearlstein always devised out-of-the-box stunts to reach the media: whether he was frying 1,000 eggs in a 10-foot frying pan with Abbott and Costello, photographing movie star Jayne Mansfield, having Snoopy run for President to promote bread or working some food products into the film “Rocky,” he always made food sexy for the media. They ate it up.

“Here’s an adventure that began as a result of a small newspaper ad and from that, I got an account that lasted over 60 years,” Pearlstein said.

At 95, Pearlstein still enjoys playing the drums in his spare time, which he learned as a kid. Pearlstein’s two sons Howard and Frank joined Leo & Associates in the 1970s and also helped edit “Adventures in PR.”