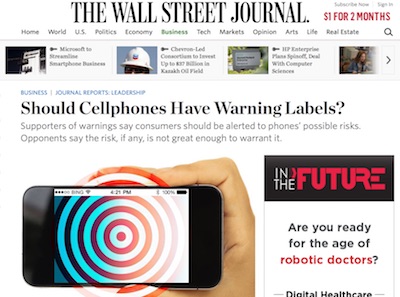 The Wall Street Journal May 23 spent 3,500+ words arguing whether cellphones should have warning labels—of course they should. Missed was the galaxy of pulsed radiation threats to all and especially children.

WSJ has thrown a bone to the electro-magnetic field (EMF) threat. But a much better use of the space would have been covering the four hours of detailed, scientific-based research on radiation presented May 22 at the Left Forum in New York.

It’s not worth arguing about cellphones. Don’t press them to your ear, don’t carry them in a pants or breast pocket, don’t put them in a bra, and don’t use them in a car or other moving vehicle. Switch cordless phones for landlines and have a wired computer, mouse and keyboard.

Arguing in the WSJ article for warning labels was Joel Moskowitz, Ph.D., director, Center for Family and Community Health, Univ. of Calif., Berkeley, while saying the risks are not great enough to warrant warnings was Dr. Larry Junck, a neurologist and professor, Univ. of Mich. Health System.

Junck would like to see more statistical evidence of cellphones causing brain cancer while Moskowitz says there is enough to make people take simple precautions. Another type of cancer linked to cellphone use is cancer of the salivary (parotid) gland.

Bigger radiation problems than cellphones and far less susceptible to ready solutions include the pulsed radiation from industrial-strength 5 GigaHertz routers commonly found in schools and designed to go through cement, brick and cover the campus. They are higher wattage and configured to serve hundreds of users simultaneously.

Students and teachers in the U.S. experience such bombardment throughout the school day. The Library of Paris, largest facility of its type in France, barred Wi-Fi in 2008. The move was led by the staff which did not want to be irradiated all day long.

Especially susceptible to EMF damage are children, babies and fetuses. A panel May 3 in Baltimore featuring Devra Davis and other EMF health advocates discussed this.

WJS would do well to publish the 54-part description of EMF dangers and solutions compiled by Camilla Rees, founder of electromagnetichealth.org, who spoke at the Left Forum May 22. It is the most comprehensive overview of the dangers of EMF.

New Yorkers and others should pay close attention to Rees since Time Warner, Comcast, Cablevision and other cable suppliers are forcing new 5 GigaHertz routers on unsuspecting customers, this writer included.

Apprised of this new danger (radiation pulsing 24/7 billions of times a second), we contacted Time Warner and had them turn off the 5GHz and 2Ghz lights on the router. Other customers of the cable companies should do the same.

A technician came to our home and found high levels of radiation throughout the apartment and particularly near windows. The highest apartments get the most radiation from hundreds of cell towers atop apartment buildings. WSJ should urge real estate interests throughout the country to look into this.

We immediately shut down Bluetooth on our MacBook and unplugged the landline phone that had a wireless companion. An antenna on the landline part spewed radiation 24/7 and was the same as a cordless phone. 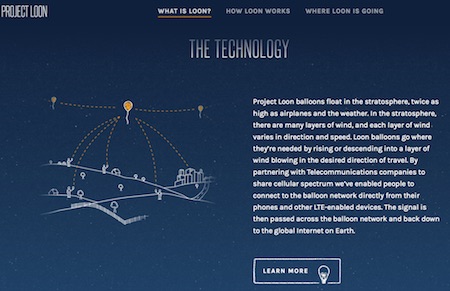 Wi-Fi and computer technology, both with dangerous aspects, permeate school, libraries and public government which have made a huge financial and intellectual commitment to their use and don’t want to walk away from it, panelists told the Left Forum. Doing so would be “biting the corporate hand” that helped finance so much of the technology, they noted.

Radiation from space is a topic that deserves exploration by WSJ.

OneWeb says it will hoist 648 satellites, drones and lasers.

Global Union Against Radiation Deployment from Space (GUARDS) has a website with descriptions of health and environmental hazards of high-altitude radiation for commercial purposes.

“Virtually the entire global population will be irradiated non-stop by 2020 whether they like it or not, says retired Canadian Army Captain Jerry Flynn, who spent6 22 years in its “Electronic Warfare” unit.

He wants the Royal Canadian Mounted Police to pursue criminal investigation of government and health authorities who ignore the many threats from pulsed radiation found in schools, hospitals, libraries and other public places.


Flynn says there has been an “explosion in autism” in children in Canada that appears to mirror the explosion in wireless technology.

In the U.S., he wrote May 22 to Prime Minister Justine Trudeau and members of the Canadian Parliament, the rate of autism in children was one in 25,000.

Quoted are statistics compiled by the Australian ADHD Foundation.

Asks Flynn: “Why does no one connect today’s tragic explosion in Autism in children with the comparable explosion in wireless technology? Each and every wireless device emits hazardous ‘low-level, pulsed, non-thermal radio/microwave frequency radiation.’”

“Tragically,” he said, “for all Canadians, the Government of Canada refuses any dialogue whatsoever on pulsed non-thermal wireless radiation, which scientists have long linked to Autism and a host of other neurological diseases, as well as diseases of the central nervous system and immune system.”

People and politicians need to realize that the non-thermal radiation, while invisible, is “cumulative,” said Flynn.