MWW Group, which is suing McDonald’s for $5.2M and is itself being sued for $830,177 by two suppliers, also is getting bad ink by ties to lobbyist Patricia Lynch and ex-Congressman Anthony Weiner.

Lynch, whose New York staffers set up shop in the New York offices of MWW, was one of the two women with whom former New York Assembly Speaker Sheldon Silver “cheated” on his wife, said a headline in the April 15 New York Post.

Lynch was the communications director for six years for Silver, who has been sentenced to 12 years in prison on charges he used his post to improperly extract millions from those doing business with the state.

She set up her own firm and three times was named to Crain’s New York list of the “50 Most Powerful Women in New York.” Her firm reportedly had 100 clients in every sector. They included Madison Square Garden, Time Warner Entertainment, Tishman Speyer and Walt Disney.

The NYP summed it up this way:  “Crooked ex-Assembly speaker Sheldon Silver kept two mistresses during his years in power, using his great influence to advance their careers in Albany, while cheating on wife Rosa and covering his tracks with a secret second cellphone, federal authorities revealed Friday” (April 15).

Federal documents cited tapes it obtained of Lynch and Silver talking on the phone and other evidence.

Everything-pr.com, a U.K. website operated by David Brock, has covered the Lynch connection and other news of MWW.

Also an embarrassment to the firm, headed by Michael Kempner, is its employment of former Rep. Anthony Weiner as a consultant from July to October 2015. He had been caught twice texting sexual emails to students. 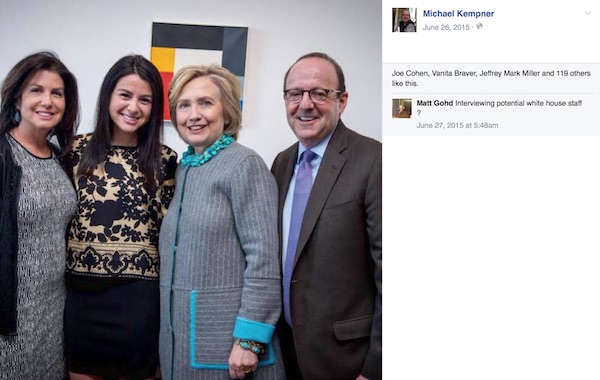 Kempner, a major fundraiser for Presidential candidate Hillary Clinton, apparently was doing a favor for Huma Abedin, longtime close aide of Hillary, who is married to Weiner. MWW praised the appointment of Weiner and Kevin McCauley, former editor of O’Dwyer’s, who joined MWW last October, was unstinting in his praise of Weiner.

He wrote on July 23, 2015, that Kempner had made a “shrewd and gutsy move” in hiring Weiner, “a straight-talking, no BS, street-smart guy, a personality found lacking in most large PR firms…a guy who gives street cred to MWW.”

“The MWW chief understands that Weiner is a brilliant guy who has his ear to the ground on Democratic and New York politics,” he wrote further. “The firm will benefit from Weiner’s counsel. Kempner made a smart move.”

McCauley, ending a 36-year editorial career including 26 at the O’Dwyer Co. and ten at The Gallagher Report, joined MWW as VP, editorial services, an Oct. 6, 2015 MWW release said.

McCauley left MWW around March 2016 and is now seeking new employment. He and Kempner have been asked whether he quit or was fired but there has been no response on that.

Kempner, because of his tie with Weiner, became a liability for Clinton since she cannot be within ten miles of anything that indicates abusive attitudes towards women, especially abusive sexual behavior.

The MWW website used to feature Kempner standing next to Clinton but that photo has been removed.

Despite the best efforts of Kempner and McCauley to shed positive light on Weiner, he was savaged by front page stories in the New York Post, New York News and New Yorker magazine. NYP continued the negative saga by reporting on the film that Weiner and Abedin had made about his candidacy

Headline on the story was: “Huma Abedin is humiliated again in new ‘Weiner’ documentary. Weiner split from MWW in October, 2015.

MWW in 2014 sued the McDonald’s New York Tri-State Owner/Operators Assn. for $5.2 million, claiming it had been wrongly fired because it was also working for an unnamed “casual dining restaurant.” Neither MWW nor McDonald’s will comment on the suit.

Scholastic, a supplier to MWW for creation of educational materials and related services, sued MWW on April 19, 2016 on charges of non-payment of $699,377.

The work “featured MWW’s client Samsung,” says the lawsuit. It says that MWW on Jan. 11, 2016, informed Scholastic: “we will not be making any additional payments on the account as we are in a dispute with Samsung.”

At some point prior to April 2015, Samsung retained MWW to organize, execute and manage several aspects of 2015 App Academy, the suit says.

Comment from MWW is being sought on all three suits.

O’Dwyer Has Grudge vs. Kempner

This writer admits to having a grudge against Kempner.

For nine years he watched as employee Joe Cohen marched through a long series of elective posts at PR Society of America’s New Jersey chapter and national PRSA. The Society has had an unethical and illegal boycott against the O’Dwyer Co. for many years which includes blocking the company from exhibiting its five news and informational products at its national conference each year.

The Society treats the O’Dwyer Co. this way despite having made considerable sums selling O’Dwyer Co. articles from 1978-1994.

Cohen joined the board of PRSA/NJ in 2006 and became president in 2009. He chaired the Tri-state district in 2010 and joined the national board from 2011-2015. He served as national chair in 2014. Attempts of this writer to reach Cohen by email or phone during all these years failed. No elected head of the Society has talked to us since 2005.

The Society spent an all time low of $945 on "ethics" in 2015 on a budget of $11.5 million. It abandoned enforcement of its ethics code in 1999 after a member charged the board with violating its Ethics Code by instituting what has become a permanent press boycott. Members have ceded much control to the staff by giving the title of CEO to the top staffer, currently Joseph Truncale, a veteran of the printing/mailing industry.

Taking part in the boycott is current elected chair Mark McClennan, an employee of Publicis, headed by Maurice Levy. McClennan refers our emails and phone calls to the PR Society staff, saying they have forbidden him to deal with us.