According to June lobbying registration documents, Las Vegas-based UFC, which is the world’s leading promoter of mixed martial arts and generated a record-breaking $600 million in 2015, has launched a lobbying effort to communicate with Congress its position on the Muhammad Ali Act, which is currently facing amendments. 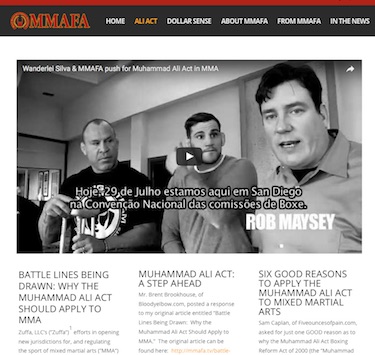 The Muhammad Ali Boxing Reform Act was created to enforce fair business practices and establish regulatory oversight to protect the welfare of boxing professionals. That federal law, which amended the Professional Boxing Safety Act of 1996, received widespread support from the boxing world when it was passed in 2000.

Currently, the Muhammad Ali Act does not apply to mixed martial arts. Some in the MMA world — including industry group The Mixed Martial Arts Fighters Association, among others — have argued that Congress should amend the Act to allow its protections to cover MMA, as the auspices it provides would benefit that fast-growing industry's fighters. Others, however, have argued that the Muhammad Ali Act isn’t applicable to MMA; that the bill was created to offer protections for another sport whose rules and organizational structure are entirely different.

The UFC, in particular, has for years resisted Congressional efforts to expand the regulations of the Muhammad Ali Act to MMA. UFC parent company Zuffa in 2008 retained lobbying firm Brownstein Hyatt Farber Schreck to lobby on Capitol Hill in opposition to Sen. John McCain’s (R-AZ) now-failed Professional Boxing Amendments Act of 2007, which would have further amended the 1996 Professional Boxing Safety Act and strengthened the oversight of the Muhammad Ali Act by standardizing new health and safety requirements as well as establishing a new commission to oversee the sport.

Now the UFC appears to have a bigger fight on its hands. On May 26, Rep. Markwayne Mullin (R-OK) introduced H.R. 5365, The Muhammad Ali Expansion Act, which would broaden the provisions in the Muhammad Ali Act to include fighters of combat sports such as mixed martial arts. The bill is co-sponsored by Rep. Joseph P. Kennedy (D-MA).

Mullin, who has served as representative for Oklahoma’s 2nd congressional district since 2013, is himself a retired professional MMA fighter.

Mullin in May told ESPN.com that currently, “fighters are treated not as an asset, but as a commodity," and said the amendment “isn't about going after an organization,” but “is to make sure that both fighters and organizations are in it for the long run."

"It can’t be slanted one way, and right now, it’s slanted towards promoters,” Mullin said.

McCain, who once characterized mixed martial arts as “human cockfighting” and in 1996 drafted legislation in an attempt to ban the sport, has apparently changed his tune, and in April came out in support of extending the Muhammad Ali Act to cover MMA, and also stated the UFC has “cleaned up their act.”