For years, America knew Mike Rowe as the guy who would willingly do all the gross and disgusting jobs they never knew existed or didn’t want to think about. At least he would do them for as long as it took to film his hit TV program on the Discovery Channel, “Dirty Jobs.”

But the show’s over and, like every other celebrity in transition, Rowe has to find a new gig, a way to reinvent his brand or both. At this point, he chose the latter. These days you can hardly scan social media or watch TV without Rowe popping up somewhere, putting in a word.

But is he asking to snake your toilet, gain access to the crawlspace under your house, climb up to your attic or some such other vocational hazard? Nope. He’s advocating common sense, often regarding the role of education and a resurgent respect for the skilled trades. Rowe’s role is more apologist than economist, and he’s not pretending to be an expert in something he’s not.

He’s simply using a previously ordained platform to call attention to important aspects of the American Dream he believes have been lost (or at the very least denigrated). In doing so, Rowe is successfully rebranding himself as America’s Cool Dad, or, better said, America’s conscience. He sees what we’ve been and could be again, and wants America’s young people to reconsider what society is expecting of them. 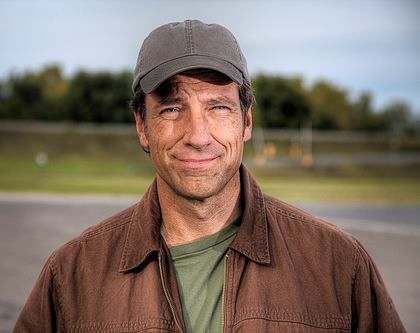 His series of video shorts for CNN, where he excoriates “bad advice,” has become an Internet sensation, catapulting the former reality TV star into an upper echelon of TV hosts to whom regular folks look for advice. The gods of this pantheon are, of course, Oprah and her protégée Dr. Phil, but Rowe is climbing the success ladder with his no-nonsense delivery and working man’s charm.

Is this the dawning of a new career for Mike, or is this just an interlude, an opportunity he’s making the most of? Tough to tell, although for the moment his high-profile public relations crusade is working.

And why not? After all, this isn’t the first time Rowe has reinvented himself. Did you know everyone’s favorite blue collar TV host was once an opera singer? Yes, Mr. Dirty Jobs once performed Rigoletto with the Baltimore Opera. That was 1984, and six years later, Rowe got his first TV gig, as a pencil spokesmodel on QVC. Not exactly glamorous, but hey, it was a living, as well as a precursor for a mindset that would define Rowe’s career and cause. After eight years with the network, Rowe was shown the door and entered his “Odd Jobs” stage of life. A pitch meeting with Discovery changed everything. He shared his idea for a three-hour documentary series. They counter-offered with a 39-episode contract for what would become “Dirty Jobs.” This job introduced Mike to America.

Meantime, Rowe kept his options open, narrating various documentaries about a variety of subjects. By the time he finished his marathon stint on “Dirty Jobs,” Rowe was a sought-after public speaker and had developed countless connections with top brands. This dove-tailed into partnerships with several iconic brands, including a big ticket sponsorship for Ford Motor Company.

So, what’s next for Mike? He recently filmed a commencement address for Prager University, where, in characteristic Rowe style, he blasted convention and got right to the point. You’ve heard umpteen graduation speeches about how kids should “follow their dreams” and “stay true to themselves” and that sort of willowy nonsense. Rowe took a sharp needle to that balloon of hot air immediately. He told graduates not to “follow their passion” but, instead, to look for opportunities and make the most of them. In other words, he gave those people the advice most of us had to learn the hard way.

He’s also helping average Americans understand a world from which technology has slowly separated us. Think about it: when was the last time you flipped a switch and wondered how it worked? You just expect the lights to come on, and you get aggravated when they don’t. In reality, we’re only a power outage away from chaos, and Rowe seems to instinctively know that.

He reminds us to be thankful and give credit to the often unsung heroes who keep modern society operating on a modern scale. And, since 2008, he’s been building an organization to do that vocationally.

Rowe’s mikeroweWORKS foundation is a targeted campaign intended to energize and emphasize the skilled trades in American culture. These days he spends a lot of time writing about work, the skills gap, offshore manufacturing and currency devaluation. Sure, he’s no credentialed economist, but Rowe isn’t trying to impress with his credentials. He’s just showing folks how to work and remind them what is was like to take pride in that work.

It’s a message that will resonate with many.

Ronn Torossian is the CEO of 5WPR, a top 20 US PR Agency.