“We do not have a program for electromagnetic radiation,” he said in an email. “The Federal Communications Commission is responsible for licensing and regulating wireless devices.”

Monell, returning an $1,810 check from Wireless Education Action, said no members of WEA “shall be allowed to exhibit, attend, or in any other way participate in the convention.”

Monell said the WEA positions that “wireless classrooms are a danger to children, that the government is covering it up, that schools are microwave radiating children without real safety standards, and that wireless systems should be banned from schools and other locations where children are exposed to them, are not consistent with National PTA’s mission, position statements, resolutions or policies.”

Morrison, who operates wirelessblogspot, said “Microwave radiation from wireless devices is a serious public health issue that should be investigated by the City Council who should then inform the public of their findings.”

“The health and genetic integrity of our children should not be compromised by industry pressure and financial kickbacks,” he added. “School officials may be personally liable in eventual lawsuits for physical damage caused by chronic Wi-Fi radiation exposure in schools. Telecommunications industries are no longer eligible for liability insurance.”

Oregon House Bill 3350 introduced in 2015 would require that parents, teachers and school employees be advised that the World Health Organization has determined microwave radiation from Wi-Fi and cell towers in schools is a Class 2B carcinogen.

One Million Teachers vs. Wi-Fi

Morrison said more than one million members of teachers unions in the U.S., Canada, U.K. and Germany “who have done their research do not support Wi-Fi in schools.” Students are subject to microwave radiation up to seven hours a day in classrooms, he added.

Martin Weatherall, co-director of Wireless Electrical and Electromagnetic Pollution (WEEP), in an email to numerous PTA chapters, applauded Morrison’s efforts to win a place at the national conference which will attract 1,500 of “the most influential leaders in education.”

Weatherall said he is “disgusted” by PTA’s refusal to “educate conference participants about the dangers of powerful microwave radiation that is likely to cause the children long term health problems for the rest of their lives and cause early death for many.”

“The huge increase in mental health problems, depression and suicide amongst children has only occurred since they have been exposed to strong wireless radiation in their schools and homes, etc.,” he added. 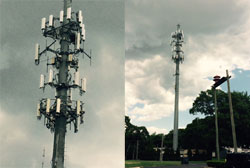 Weatherall provided a link to bioinitiative.org which has compiled a list of diseases and illnesses linked to radiation.

He noted that National PTA lists Amazon Kindle as a sponsor. “Kindle is a device that needs Wi-Fi or 3g wireless for connectivity,” he said, since it is fully wireless and doesn’t require a computer to download its content.

“This is surely a serious conflict of interest for National PTA as over 60 years of scientific evidence clearly shows serious biological effects from exposure to microwave radiation. This partnership with a company that has a commercial interest in wireless devices appears to put sales and profit over health and safety of children.”

“The health and safety of children should come first,” he added. The PTA should allow space at its national conference for this “important subject,” he said.

The Suffolk County Dept. of Health Services, in whose area Westhampton falls, does not regulate radio-frequency electromagnetic radiation from cell towers or other mobile device sources, said an email by Shannon Gavney of the Commissioner’s office to Paul Brady, aide to Legislator Bridget Fleming, Sag Harbor.

We had sought help from Grace Kelly McGovern, who is PR director of the county, who directed us to the office of Public Health Commissioner Dr. James L. Tomarken.

What has spurred us on this topic was the sight of tall cellphone towers as we travel the roads in the Hamptons.

One of them is in Eastport-Manorville about 100 yards from the Montauk highway (NY27A), the main artery that passes through the towns on the South Shore. Houses are within 100 yards of the tower.

Using our Acoustimeter, we found three volts per meter and 1,000 to 2,500 microwatts per square meter at the base of the tower, where there were signs warning about the dangers of radiation.

The booklet that accompanied the Acoustimeter says that three to six volts is what would be encountered “close to a mobile phone (cordless) base station” and also near Digital Enhanced Cordless Telecommunications (DECT) base units and Wi-Fi access points.

“Most people with electromagnetic sensitivity experience adverse health effects above the 0.30 level,” says the booklet.

The radiation levels were about the same when we walked 100 yards from the tower.

The three-volt reading at the base of the celltower surprised us because we found readings of six volts and 1,000 to 2,500 microwatts per square meter in the room in the Westhampton library where 64 seniors play bridge each Tuesday for four hours.

The library board meets once a month in that room and is in considerably less danger.Asked to examine the Wi-Fi routers that are causing the radiation, library director Danielle Waskiewicz said that would not be possible. The routers are in the ceilings throughout the library and not available for public inspection, she said.

Nevertheless, we will continue to press for public inspection of the routers which cause more radiation throughout the library than is recommended by bioinitiative.org.