FCC chair Tom Wheeler is pushing for adoption of 5G Wi-Fi router technology July 14 which need millions of mini cell towers potentially in every home and every room.

Alarmed health advocates say Wheeler has provided no time for public comments or hearings. He described 5G at the National Press Club June 20, saying it is “a national priority.” It was not mentioned on the FCC main page.

“That means thousands—perhaps millions—of mini cell towers, or ‘small cells’ would be needed on top of every lamp post, every building, inside every home and potentially every room,” it said.

June 20 was celebrated as the inaugural “World Wi-Fi Day.” 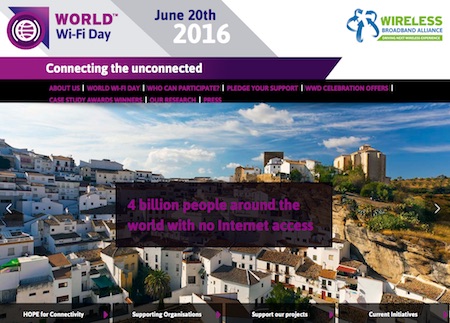 It will be “a global platform to recognize and celebrate the significant role Wi-Fi is playing in getting cities and communities around the world connected,” said Wheeler. “It will champion exciting and innovative solutions to help bridge the digital divide, with Connected City initiatives and new service launches at its core.”

Smartgridawareness says “The drive towards 5G could make smart meter emissions look like almost nothing in comparison. We have no idea what the health consequences of 5G might be like but yet no one in industry or government seems concerned about that, not even a little bit.”

The site said Wheeler’s proposal, called “Spectrum Frontier,” is being enacted without “regulation, thoughtful process, etc. This is about turning developers loose, completely, to create what they want. Absolute insanity."

Wheeler was president and CEO of the Cellular Telecommunications & Internet Assn. from 1992-2004 and is the only person ever named to both the Cable TV Hall of Fame and the Wireless Hall of Fame. 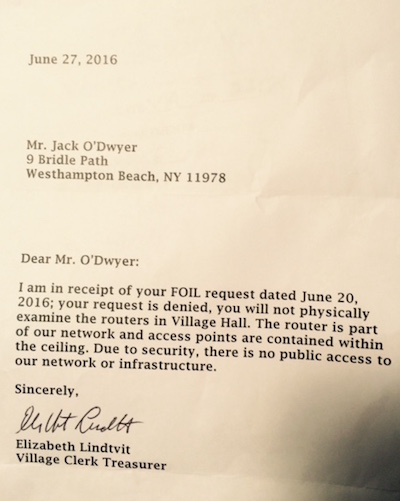 The Westhampton, New York, library, citing the FCC’s view that radiation is permissible as long as it does not raise the temperature of bodily tissues or fluids, has rejected demands of local residents for the removal of its Wi-Fi system pending further investigation.

The library will not let this reporter examine or take photos of the Wi-Fi routers which are in the ceilings throughout the building. Highest levels of radiation, as measured by an Acoustimeter, were found in the room where 64 seniors play bridge for four hours each Tuesday. The library board meets in the same room once a month.

Board president Tom Moore and other board members were shown the high ratings but ridiculed them and said “Why don’t you worry about the sun also since that is radiation?”

High radiation levels were also shown to Mayor Maria Moore, wife of Tom Moore, during a meeting of the Village board June 2. Both Moores dismissed the readings as inconsequential as did the other four board members.

When Mayor Moore refused to let us examine the routers in village offices we filed a Freedom of Information request. That was turned down on the ground that the routers are “within the ceiling.”

We have asked Moore and Village Clerk Elizabeth Lindtvit if we can have all the specifications of the routers and take a photo of one.

Martin Pall, Ph.D., biochemist at Washington State University, argues that because EMF heating is produced mainly by forces on singly charged groups in the aqueous phases of the cell, the safety guidelines/standards that allow people to be exposed to EMFs are 7.2 million times too high because they are using the wrong target.

Recipients get a big increase in nitrite oxide with calcium in the cell, leading to free radical generation and oxidative stress. They also get an increase in super oxide. These two react with each other, allowing disease causing changes to occur. Calcium signaling is very important in the cell and problems result when there is too much of it.

Health advocates believe an “autism epidemic” is probably largely caused by EMF exposures although chemicals also have a role.

At the AutismOne meeting in Chicago last year, Pall discussed 32 different types of evidence that support a pathway of action from microwave EMF exposure through disruption of synapse development in the developing brain of autism
patients.

EMFs Have Role in Increased Alzheimer’s

Stop these ever increasing levels of exposures. There are many ways to make these devices much safer but we are running as fast as we can in exactly the wrong direction.


We need biologically relevant safety standards, not the nonsense safety standards that we have now. The best way to develop such standards is to study the effects of EMFs on cells in culture, cells that have high levels of various types of VGCCs. Such cell culture work is not difficult to do, nor is it very expensive to do. It needs to be started right now!!