At least 1,195 journalists have been killed since 1992, says the Committee to Protect Journalists. That’s bad, but we also find that reporters are restricted as to what they can report by their own publishers, which is also bad.

CPJ, whose annual report on journalist deaths was covered in the June 21 New York Times, is almost exclusively concerned with persecutions of journalists outside the U.S.

Worst country for journalists is Iraq where at least 149 local and 23 foreign journalists have been killed since 1992.

Our hearts go out to the families of murdered, tortured, jailed, sued and deported journalists. UNESCO’s Navi Pillay has also kept track of persecuted journalists, publishing a 51-page report on it.

Both CPJ and Pillay note that better than 90% of the murders of journalists are never solved. Most of the time, no effort is made to find the murderers.

Journalists, many of them working for media that are on thin financial ice because so much news and information is free on the web, are under increasing pressure to bow to financial and political drumbeats set by publishers.

Certain subjects are considered to be off-limits while politically correct subjects can be covered almost without limit.

One subject that gets little play, obviously because three of the five biggest advertisers are telecom companies (Verizon, Comcast and AT&T), is the dangers from pulsed radiation from Wi-Fi routers, cellphones, cordless phone base stations, wireless utility meters, computers, the 5,000+ cellphone towers, wireless baby monitors, etc.

Radiation health advocates are in shock over a new wave of powerful, pulsed radiation sources that companies plan for the nation with the approval of the Federal Communications Commission.

Endangered is the entire 324 million population of the U.S.

This could mean perhaps millions of mini cell towers on top of lamp posts, buildings and inside every home and even every room, says smartgridawareness.org.

Anyone who doubts that pulsed electro-magnetic radiation is a health threat, although it may take years for symptoms to appear, should check the urgings of retired Canadian Army Captain Jerry Flynn who spent 22 years in its “Electronic Warfare” unit. The purpose of the unit was to damage the health of enemies without them knowing it.

Frustrated by the refusal of Canadian Health authorities to reduce or eliminate radiation in schools, libraries, offices, etc., he has called on the Royal Canadian Mounted Police to investigate this.

Other sources are bioinitiative.org and a 54-point overview of the subject by Camilla Rees, Ph.D., founder of Electromagnetichealth.org.

He has not heard from them. We also wrote to the two groups and got the same non-response.

The National Parent Teachers Assn., which met in Orlando June 30-July 4, first allowed, but then cancelled an exhibit by wirelesswatchblog.org operated by David Morrison.

Morrison, a candidate for the Portland City Council who wants to bar Wi-Fi from local schools, said PTA executive director Nathan Monell turned him down. Laura Bay is elected president for 2015-17.

Monell, returning an $1,810 check from Wireless Education Action, said no members of WEA “shall be allowed to exhibit, attend, or in any other way participate in the convention.”

Monell said the WEA positions that “wireless classrooms are a danger to children, that the government is covering it up, that schools are microwave radiating children without real safety standards, and that wireless systems should be banned from schools and other locations where children are exposed to them, are not consistent with National PTA’s mission, position statements, resolutions or policies.” 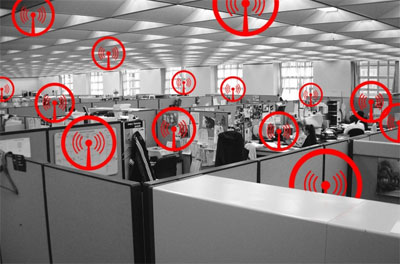 Morrison said “Microwave radiation from wireless devices is a serious public health issue that should be investigated by the City Council which should then inform the public of its findings.”

“The health and genetic integrity of our children should not be compromised by industry pressure and financial kickbacks,” he added. “School officials may be personally liable in eventual lawsuits for physical damage caused by chronic Wi-Fi radiation exposure in schools. Telecommunications industries are no longer eligible for liability insurance.”

Oregon House Bill 3350 introduced in 2015 would require that parents, teachers and school employees be told that the World Health Organization has found microwave radiation from Wi-Fi and cell towers in schools is a Class 2B carcinogen.

One Million Teachers vs. Wi-Fi

Morrison said more than one million members of teachers’ unions in the U.S., Canada, U.K. and Germany “who have done their research, do not support Wi-Fi in schools.” Students are subject to microwave radiation up to seven hours a day in classrooms, he noted.

Martin Weatherall, co-director of Wireless Electrical and Electromagnetic Pollution (WEEP), in an email to numerous PTA chapters, applauded Morrison’s efforts to win a place at the national conference which attracted 1,500 of “the most influential leaders in education.”

“The huge increase in mental health problems, depression and suicide among children has only occurred since they have been exposed to strong wireless radiation in their schools and homes, etc.,” he said.

He noted that National PTA lists Amazon Kindle as a sponsor and that Kindle needs Wi-Fi or 3g wireless for connectivity. “This is a serious conflict of interest as over 60 years of scientific evidence shows serious biological effects from exposure to microwave radiation,” he said.