A nationwide campaign led by Parents for Safe Technology is targeting members of Congress in a drive for public hearings before the Federal Communications Commission okays new and more powerful Wi-Fi technology.

Wheeler has made 5G a “national priority” and is pushing for its adoption. Opponents say he is doing this with no time allotted for public discussion.

Urges PST: “Be sure to express the importance of having oversight hearings related to the negligence of the FCC in promoting wireless technology and even rolling out an additional radiation intensive technology (5G) after the National Toxicology Program released findings that radiation from wireless technology causes cancer and breaks DNA.”

“The FCC limits on radiation from wireless technology are outdated and inadequate,” says PST.

It quotes the U.S. Dept. of Interior as saying: “The electromagnetic radiation standards used by the FCC continue to be based on thermal heating, a criterion now nearly 30 years out of date and inapplicable today.”

Kate Kheel, director, Maryland Smart Meter Awareness, is helping citizens in their efforts to win attention from their representatives in Congress.

Safety of Citizens Is Paramount

The safety and health of citizens should be the paramount concern of government officials.

Wi-Fi/pulsed radiation healthcare advocates are not finding that to be the case. Governments are often allied with commercial interests whose activities and products work against the health and safety of citizens.

This reporter is finding that to be true where we spend more than half the year—Westhampton Beach.

Efforts to get the five WHB trustees or seven library trustees to take up the topic go nowhere. They are unmoved even though we display high radiation readings to them on our Acoustimeter in the very rooms where they are meeting.

In the most danger are staffers who spend all day in these rooms although it may take years for symptoms to appear. Staffers at the huge Library of Paris realized this back in 2008 and banned Wi-Fi from its two tall buildings.

High-powered, industrial-level Wi-Fi routers are in the ceilings throughout both the WHB and library offices but officials in both places refuse to show us the routers or provide their specifications.

Cablevision No Help So Far 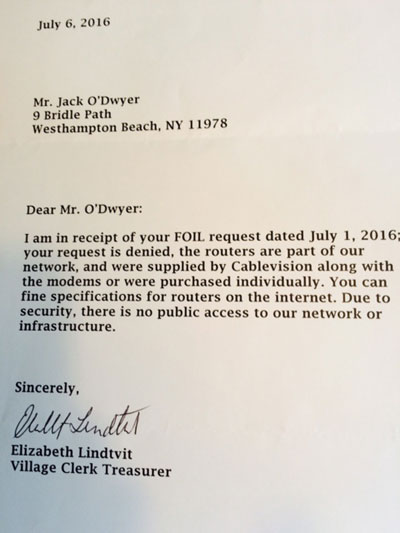 WHB clerk/treasurer Elizabeth Lindtvit turned down our Freedom of Information request saying there is “no public access to our network or infrastructure” and telling us to try supplier Cablevision.

We called Cablevision which is usually very helpful but in this case technicians said they could only give the specs for routers used in homes and not those used in businesses or organizations.

They shifted us to Lisa Anselmo, VP-corporate communications,

Altice, French telecom company that recently purchased Cablevision, Newsday and News12.com in a $15.7 billion transaction. Cablevision, in a surprise move, last week said it was buying back a 75% stake in Newsday. Losses of the paper in the past eight years that Cablevision has owned it have topped $150 million, said the New York Post.

Cablevision execs have been living high on the hog, 300 of them getting $300K in pay while driving debt to $7.43 billion. Altice wants to shave $900M in costs and introduce the “quadruple play.” Cable companies in Europe have been offering a package of four services--TV, phone, web and wireless. U.S. companies thus far only offer the first three—the “triple play.”

Anselmo was not immediately available and no other staffers would handle the question.

The Westhampton Beach board had its inaugural meeting July 5, inflicting nearly two hours of bureaucratic motions and legalese on 30 residents before letting any of them speak.

The agenda passed out at the beginning of the meeting listed 47 resolutions that had to be read out in full and passed before discussion of a radio antenna at the new firehouse could begin.

William Glass, lawyer for the WHB fire district, with the help of Dennis Kenter of Relay Communications Corp., held the floor for nearly an hour, covering every possible angle related to firehouse sirens, radio and telephone communications with firefighters.

Only when residents were allowed to speak at nearly the two-hour mark was it brought out by one resident that sirens are not really necessary any more since firefighters can be contacted by pagers, cellphones and regular phones. A new 100-ft. high radio tower next to the new $15.7 million firehouse was approved. It allows the fire chief to contact key personnel who then use pagers to contact the all-volunteer force.

There has been some grumbling among residents about the cost of the new firehouse but fighting fires and preventing conditions that lead to them is so important that skimping on this function is usually unheard of.

The concern is the safety of residents. We can only wish that some of the concern for residents shown July 4 at the WHB meeting could be shifted to another danger that threatens the health of residents—pulsed, electro-magnetic radiation showering them from the ceilings of the WHB village hall and the library. WHB classrooms have similar routers.

The radiation levels, as measured by an Acoustimeter that we displayed to the room, are in the danger zone.

Sources on the health threats of radiation are at bioinitiative.org and the 54-part essay by Camilla Rees. The O’Dwyer website has more 300 entries on the subject, almost all of them in the free area.

More than one million members of teachers’ unions in the U.S., Canada, U.K., and Germany have signed petitions to remove industrial-level Wi-Fi routers from their classrooms, reports David Morrison, who operates wirelesswatchblog. http://www.wirelesswatchblog.org

Another subject the board does not want to hear is the fact that the eruv Jewish boundary accepted last month by the WHB board is a violation of the U.S. Constitution, which Mayor Moore swore to uphold at the July 5 meeting.

Residents who view the videotape of the July 5 meeting will have first hand knowledge of how much time of villagers was wasted.

Unfortunately, the meeting has yet to make its appearance on the WHB website. That is also illustrative of the attitude of WHB officials—keep the lid on info as much as possible.

The meeting should have been live webcast just like the board meetings of Southampton. Then the trustees could not get away with their lengthy, time-wasting recitation of license renewals, appointments of officials, etc., which belong at the separate “work” session of the board.

Comments by citizens should be first and not last. We will measure the time used by Glass when the video is finally posted.

Mayor Maria Moore sat passively while Glass droned on an on, returning to the mike several times just when residents thought he had exhausted about everything that could be said about sirens.