“The proposed 5G Spectrum Frontiers is a boon to industry and a devastation to our health,” says Parents for Safe Technology under the headline, “Take action against 5G now!!!”

The Federal Communications Commissions is scheduled to vote on approval of 5G technology tomorrow (July 14).

Joe Esposito of emfsafetynetwork.org says there is a palpable danger from “untested 28GHz radiation blasting from millions of new hidden antennas and tuned-up ‘smart’ meters.”

He describes it as “a corporate free-for-all, with oversight eliminated. Total, for-profit surveillance. An ‘internet of everything’ with ‘hundreds of billions of microchippable products.’ Everywhere and everything... and eventually, everyone.”

“They are a pair of predators guarding the hen house believing “technology should drive policy” instead of the other way around where humanity comes first. All radiofrequency radiation [RFR] is biologically active and the recent NIH National Toxicology Program study results along with countless earlier studies prove causation between RFR and various cancer and non-cancer harmful health effects. First do no harm.”

Clinton’s support for 5G is in a paper titled “Hillary Clinton’s Initiative on Technology and Innovation.” It is as follows:

“Deploy 5G Wireless and Next Generation Wireless Systems: America’s world-leading rollout of 4G wireless networks in the first half of this decade has been a success story for policy-makers, industry, and American consumers. The Obama Administration played a key role by repurposing spectrum and auctioning licenses, as well as by making new spectrum available for unlicensed technologies.

“Hillary will accelerate this progress and help foster the evolution to 5G, small cell solutions, and other next-generation systems that can deliver faster wireless connections. Widely deployed 5G networks, and new unlicensed and shared spectrum technologies, are essential platforms that will support the Internet of Things, smart factories, driverless cars, and much more—developments with enormous potential to create jobs and improve people’s lives.”

Esposito’s email urging citizens to battle FCC’s proposed acceptance of 5G is below: 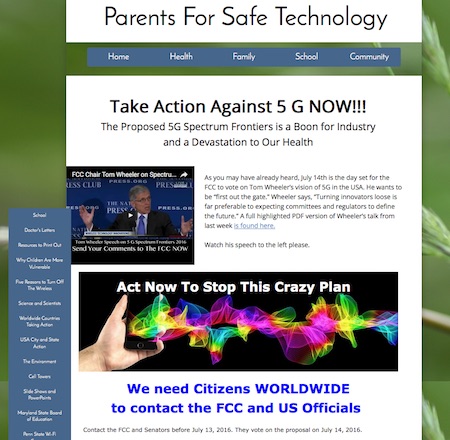 Check out Wheeler's speech for yourself, here. He stammers through it like a man mostly-possessed. This is desperation on their part. They know full well that the next phase of the megalomanic rollout needs to happen before the SHTF for them, and the tipping point is reached in terms of a convergent awareness of wireless health / surveillance / technocratic insanity — and their liability.

So let's engage and make some noise. Your voice is needed today. This plan is being fast-tracked & voted on tomorrow, Thursday July 14. Let the FCC and this government know that if they do not listen to science and reason, they will be held accountable and liable for their actions. Money is not only their god - it's their language.

2) Several thousand studies that indicate a biological effect and/or harm:

4) Apple manual states to keep your iPhone away from your body at all times:

8) More than 60 international warnings on Wi-Fi and microwave radiation:

10) TED Talk from a former Environmental Engineer in Silicon Valley:

12) Another insurance giant, Lloyd's of London, will not insure anything wireless:

15) WHO involved in suppression of additional science showing harm, since 2011:

17) CEO of 1 Billion-dollar U.K. company speaks out on microwave sickness:

18) Dozens of specific scientific abstracts that all show harm: