President Obama, one day after the FCC voted to adopt new 5G wireless technology that is called unsafe by health advocates, committed $400 million to 5G “research.”

Obama said July 15 that the National Science Foundation, funded by $7 billion in government funds, will pledge $50M over the next five years as part of an $85M investment by NSF and private sector companies “to build the testing platforms starting with the 2017 fiscal year.” NSF is also committing $350M over the next seven years that will “take research from the concept phase to real-world testing at scale,” he said.

Health advocates noted that health and environmental considerations were absent from Obama’s statement. 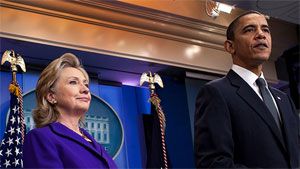 They also wonder if politics is involved since Obama has come out in support of Hillary Clinton as President and she has expressed strong support of 5G technology in a position paper.

Her support of 5G has drawn the ire of Wi-Fi health advocates who say she ignores radiation’s health effects.

Her position paper says: “Hillary will accelerate this progress and help foster the evolution to 5G, small cell solutions, and other next-generation systems that can deliver faster wireless connections. Widely deployed 5G networks, and new unlicensed and shared spectrum technologies, are essential platforms that will support the Internet of Things, smart factories, driverless cars, and much more—developments with enormous potential to create jobs and improve people’s lives.”

“The proposed 5G Spectrum Frontiers is a boon to industry and a devastation to our health,” says Parents for Safe Technology under the headline, “Take action against 5G now!!!”

Joe Esposito of emfsafetynetwork.org says there is a palpable danger from “untested 28GHz radiation blasting from millions of new hidden antennas and tuned-up ‘smart’ meters.”

He describes it as “a corporate free-for-all, with oversight eliminated, total, for-profit surveillance, an ‘internet of everything’ with ‘hundreds of billions of microchippable products,’ everywhere and everything... and eventually, everyone.”

“Our Government and industry,” said Esposito, “have come together for control and profits at huge expense to the public’s health and their physiological existence. Wireless ‘smart’ utility meters represent the same kind of threat. 5G is smart meters on steroids or full warp speed ahead.”

“Electricity was supposed to be inside wires,” he said. “Wireless is simply raw electricity outside of wires being blasted at everyone. The reality of wireless is that everyone is being 'subtly electrocuted'."

He asks if the FCC will place 5G small cells without public consent wherever it wants as it has done with cell towers; whether the public will be allowed to sue the owners due to health effects, and whether 5G small cells will be forcibly installed in homes?

Mary Adkins, Rhode Island Director for Citizens for Safe Technology, said in a filing to the FCC that “5G is a death sentence for the millions being crippled by wireless radiation.”

Ed Friedman, spokesperson for the Maine Coalition to Stop Smart Meters, said the FCC’s action, lacking any stipulations regarding health and safety or environmental impacts, “is in clear violation of the National Environmental Policy Act. NEPA review is required for any major federal action affecting the human environment. President Obama must be blamed for appointing Tom Wheeler, director of the former Cellular Telephone Industries Assn., now known as CTIA, as chairman of the FCC and chief fox guarding the hen house.”

Joel Moskowitz, director of the Center for Family and Community Health at the University of California at Berkeley, said in an open letter to the FCC that its electro-magnetic radiation standards “were adopted 20 years ago. Many scientists believe they are obsolete because they do not protect the population from established, non-thermal risks from RF radiation exposure. Thus, to ensure public health and safety, the FCC should commission an independent review of the biologic and health research to determine whether the RF standards should be modified before allowing additional spectrum to be used for new commercial applications.”

He also noted that the FCC has yet to act in a proceeding it launched in 2013 to explore whether it should modify its RF exposure standards for the first time since they were adopted in 1996.

“5G Must be Stopped”

“I'm writing to demand that our elected officials and those working on their behalf put a stop to Tom Wheeler's insane plan to roll out 5G across the country,” said an EMF healthcare advocate. “Mr. Wheeler is apparently unaware or unconcerned that there are literally millions of people in this country whose health has already been devastated by wireless technology,”

Healthcare advocates were quoted by Paul Kirby of Wolters Kluwers who did an extensive analysis of the FCC’s July 14 action for TR Daily, a unit of WK.

Kate Kheel, director, Maryland Smart Meter Awareness, said implementation of 5G “will increase the amount of RF radiation in the environment and result in additional adverse health impacts to the public.”

“Most disturbing,” she said, “was that in light of all the science, and the recent National Toxicology Study results that were just released, not once was health brought up. Money, technical hurdles, etc., but no mention of health. These frequencies require an extremely dense infrastructure, necessitating a small cell tower on nearly every home or lamppost,” she told TRDaily in an e-mail. “Shame of the FCC!!!"