The number of children diagnosed with autism has exploded from one in 10,000 several decades ago to one in 68, according to Centers for Disease Control & Prevention.

Among those searching for reasons for the explosion are Rep. Dan Barton (R-Ind.), who calls it “worse than an epidemic, an absolute disaster,” and Rep. Carolyn Maloney (D-New York), representing much of the East Side, who blames it on excessive vaccinations of children.

Autism is defined by CDC as a range of functional disabilities including lack of social skills, intellectual disability and language impairment. Victims may engage in repetitive movements or unusual behaviors such as flapping their arms or rocking from side to side.

Maloney, addressing a hearing of the House Oversight and Government Reform Committee, said she could not accept increased diagnosing of the syndrome as the reason for the jump. She has asked CDC to investigate further.

The answer, according Martin Pall, Ph.D., biochemistry, of Washington State University, is microwave electro-magnetic radiation fields from routers, cellphones, computers, wireless iPads, cell towers, wireless utility meters and other sources. U.S. classrooms from the earliest grades are normally equipped with Wi-Fi systems and many children have their own cellphones.

Pall has authored a 42-page analysis of the biology involved when the body interacts with pulsed microwave radiation. 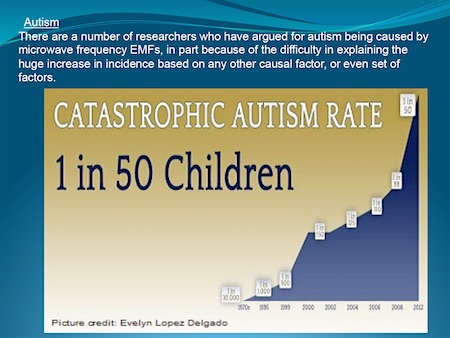 The paper is illustrated with many diagrams and graphics to show the points that Pall is making.

Retired Canadian Army Captain Jerry Flynn says an “explosion of autism” in children in Canada appears to mirror the explosion in wireless technology.

He wrote May 22 to Prime Minister Justin Trudeau and members of the Canadian Parliament that the rate of autism in children in the U.S. was one in 25,000 before 1970.

Asks Flynn: “Why does no one connect today’s tragic explosion in autism in children with the comparable explosion in wireless technology? Each and every wireless device emits hazardous ‘low-level, pulsed, non-thermal radio/microwave frequency radiation.’”

He includes cellphones, wireless utility meters, wireless computers, cordless phones, GPS satellites and cellphone towers. They never “shut off,” he said. “Tragically,” he said, “for all Canadians, the Government of Canada refuses any dialogue whatsoever on pulsed non-thermal wireless radiation, which scientists have long linked to autism and a host of other neurological diseases, as well as diseases of the central nervous system and immune system.”