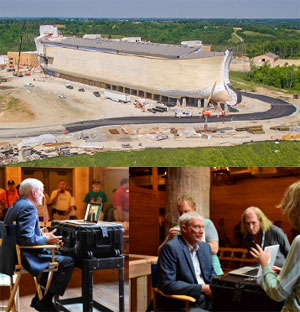 The $102M tourist attraction charges visitors about $40 each to enter.

New York-based Auritt set up more than 30 live interviews at the "Ark Encounter," which was built according to "biblical dimensions" and measures nearly 200 yards long and five stories high.

Ken Ham, president of the attraction, handled interviews set up by the firms. "It's meant to make a statement that Christians can make a major attraction like this," he told CBS News. He hopes to draw two million visitors each year, including critics and believers.

The project was controversial from the start and millions of dollars in tax incentives only fueled the fire, although a federal court settled the issue this year.

Larry Ross is a prominent Christian PR pro based in Texas.

Ross' firm reports that the PR push had more than 150 media reps on-site for the VIP and media preview day and nearly 60 on opening day, with coverage from NBC’s evening news program, CBS evening and morning programs, and Fox News daytime programming. The park was previously featured on ABC Nightline and on CNN's daytime programming, as well.