The Federal Communications Commission is asking for public comment on “unwanted radio frequency from man-made sources,” the technical term for what health advocates call “dirty electricity.”

Dirtyelectricity.ca says such electricity is “a dangerous form of electrical pollution that is invading homes, largely escaping public attention. The poor quality of electric power may be making many of us sick. Homes, schools and workplaces are becoming increasingly contaminated with invisible micro-surges of dangerous radio-frequency radiation.” 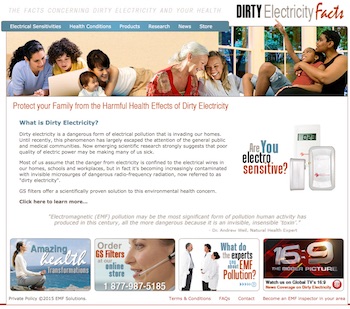 The FCC’s Technical Advisory Council is seeking public comments by Aug. 11. It refers to dirty electricity as “noise” and says “the noise floor in the radio spectrum is rising as the number of devices in use that emit radio energy grows.”

It wants to add to available data on the issue “in order to answer important questions regarding this topic.”

It says “Too many electromagnetic fields surrounding us—from cellphones, wi-fi, and commonplace technology—may be seriously harming our health.” It provides ways to minimize exposure.

Cars Can Make You RF Sick

Electricalpollution.com says “Many with RF sickness have trouble with cars due to conducted and radiated RF from components not designed to minimize RF emissions sufficient to protect human health.”

“Availability of stripped down properly designed car models should allow people with RF sickness to use a car again,” it says.

Health advocates say members of the European Union have led the way on EMF investigations, moving to protect their citizens, particularly children and pregnant women.

In the past two years, France, Germany, and England have dismantled wireless networks in schools and public libraries, and other countries are pressing to follow suit. Israel has banned the placement of cellular antennae on residences, and Russian officials have advised against cell phone use for children under 18.

Symptoms include fatigue, facial irritation (resembling rosacea), tinnitus, dizziness, and digestive disturbances, which occur after exposure to visual display units, mobile phones, WiFi equipment, and commonplace appliances. Up to three percent of all people are said to be clinically hypersensitive and as many as one-third have EHS to a lesser degree.

"For the first time in our evolutionary history, we have generated an entire secondary, virtual, densely complex environment—an electromagnetic soup—that essentially overlaps the human nervous system," says Michael Persinger, PhD, a neuroscientist at Laurentian University who has studied the effects of EMFs on cancer cells.”

“And it appears that, more than a century after Thomas Edison switched on his first lightbulb, the health consequences of that continual overlap are just now beginning to be documented,” he adds.