Radiation health advocate Katie Singer has provided a detailed explanation of what is meant by “5G,” a new form of wireless transmission approved by the Federal Communications Commission July 14. The other “4G’s” are also explained.

The vote in favor of “Spectrum Frontiers” gives the FCC authority to allocate or rent 5G (5th generation) bandwidth.

Singer, author of An Electronic Silent Spring, published in 2014 by Steiner Books, notes that Congress passed the Telecommunications Act of 1996 that prohibits environmental and health concerns from interfering with the placement of telecom equipment.

Health advocates say the effects of pulsed radiation on people have largely been ignored by the media, governments, libraries, and schools. Firefighters, who have blocked the erection of cellphone towers on firehouses, are one of the few groups openly fighting radiation threats. The website of the International Firefighters Assn., with 300,000 members, has a 27,539-word document describing the health threats supported by links to 48 scientific sources. 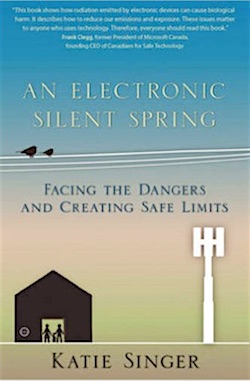 More than one million teachers have signed a petition asking for the removal of Wi-Fi routers from classrooms. Teacher groups were barred from exhibiting health concerns at the conference of the National Parent Teachers Assn. June 30-July 4 in Orlando.

Singer has sent the media the following from her July NL.

Some mobile devices are now labeled "5G." In this case, the "G" refers to gigahertz (GHz). These devices' Wi-Fi and Bluetooth may operate at 5GHz, or five billion vibrations per second.

Currently, with 4G, Verizon does not have enough bandwidth for its customers to download more than one DVD per day. With 4G, downloading a feature-length movie can take eight minutes, notes The New York Times. You could download the same movie in less than five seconds with 5G.

According to FCC Chair Tom Wheeler, 5G will provide speeds 10 to 100 times faster than 4G speeds. With 5G, "autonomous vehicles will be controlled in the cloud. Smart-city energy grids, transportation networks and water systems will be controlled in the cloud. Immersive education and entertainment will come from the cloud." 5G could allow surgeons to perform surgery remotely. It will "unleash new waves of innovation and discovery that we are yet to imagine."

How will 5G be deployed?

5G will operate by millimeter waves (mmW). These are very short microwaves. According to Wheeler, mmW signals "tend to travel best in narrow and straight lines, and do not go through physical obstacles very well. This means that...5G buildout is going to be very infrastructure intensive, requiring a massive deployment of small cells."

Dr. Gary Olhoeft, professor emeritus of geophysics at the Colorado School of Mines, explained mmW and 5G infrastructure another way: "Say you put a frozen chicken into a microwave oven, which operates at 2.45 GHz. You'll cook the whole chicken. If you put a frozen chicken into an oven operating in the millimeter range, you'll boil off its skin. The meat under the skin will not cook, because millimeter waves will not penetrate past the surface. Likewise, 5G bands will not penetrate buildings made of concrete and rebar or adobe and chicken wire. They could penetrate wood and windows. To access 5G effectively, we'll need transmitters on every utility pole, possibly every building, possibly more than one transmitter per building."

Some airport full body scanners operate with mmW imaging technology. The scanner highlights a person's "generic outline" onto a monitor. While the TSA claims negligible risk from these scanners, mmW technology is also used to treat some skin cancers.

What is the basic motivation behind deploying 5G?

At a recent technical meeting of the IEEE Communications society, at the Univ. of Colorado/Boulder, Dr. H. Anthony Chan of Huawei Technologies was asked this question after a lecture about 5G. He replied, "If technology does not change, the company will die.... People must buy a new phone.


For the most part, we don't know, since 5G is largely untested. In the Air Force's Radio Frequency Radiation Dosimetry Handbook, 5th Ed., 2009, the chapter "Responses to RF Overexposures" reported that a study of the millimeter frequency 94GHz found effects on the surface of the eye. These effects are "highly dependent on energy density and, because the effective stimulus is joule heating, exposure duration is very important" (emphasis added). With ubiquitous, dense deployment of 5G transmitters, living creatures may not be able to shorten the duration of their exposure.

For now, these are unanswered questions. Further, the Spectrum Frontiers does not designate any agency to test or regulate 5G for biological safety. It will allow industry to define 5G's intensity, amplitude and duration, as well as its specific absorption rate.

While the FCC is responsible for overseeing the safety of radiofrequency emissions, Chair Tom Wheeler has clarified that "we" will "stay out of the way of technological development, since "turning innovators loose is far preferable to expecting committees and regulators to define the future."

It's worth noting that the FCC has typically not enforced its emission standards on existing cellular antennas. See “Americans Beware,” a 2013 study conducted by the Electromagnetic Radiation Policy Institute of 600 cell tower sites around the U.S.

Did the FCC conduct a NEPA (National Environmental Protection Act) assessment before it voted to permit the Spectrum Frontiers?

Isn't this grounds for a lawsuit?

Yes. However, in the event that a court required the FCC to conduct a NEPA review, it (FCC) would conduct the review. We can predict that they'd find no environmental reasons to prevent 5G deployments. Further, scientists cannot study what does not exist.

How much electricity will 5G require, and how will this usage impact climate change? Isn't reducing our energy use and climate change impacts a greater "national priority" than 5G?

In 2015, the single largest category on YouTube was cat videos. Perhaps, if the public learned this and committed to a moratorium on cat videos, we could begin to reduce our energy use...and open so much 4G bandwidth that we wouldn't need 5G?