A best-selling author who operates his own website, Dr. Mercola says, “Barring a life-threatening emergency, children should not use a cellphone or a wireless device of any type. They are far more vulnerable to cellphone radiation than adults due to having thinner skull bones and developing immune systems and brains.”

He advises parents to bring evidence of risk from cellphone and wireless technologies to schools and teachers unions, saying, “Protective change is not going to happen soon enough at the federal level, thus grassroots action to educate people responsible for the lives of vulnerable populations is essential. Follow this topic at Campaign for Radiation Free Schools on Facebook.”

He also advises against any wearable tech such as “smart watches, which emit extremely high levels of radiation. Wireless on the body is extremely misguided.” While not naming any products, his advice would pertain to the Apple Watch.

A total of 13 million Apple Watches were sold in the first year ended in April 2016 at an average price of $500.

Mercola told New York Times “Styles” columnist Nick Bilton March 18, 2015 that “as long as a wearable does not have a 3G connection built into it, the harmful effects are minimal, if any.”

“The radiation really comes from the 3G connection on a cellphone, so devices like the Jawbone Up and Apple Watch should be O.K.,” Mercola told Bilton. “But if you’re buying a watch with a cellular chip built in, then you’ve got a cellphone attached to your wrist.” And that, he said, is a bad idea. [This last sentence is not in quotes in the Bilton article which has two lengthy “Editor’s Notes” attached to it giving different viewpoints on the safety of smart phones and radiation]. 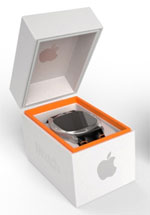 The Bilton article says the Apple Watch uses Bluetooth and Wi-Fi to receive data, and researchers say there is no proven harm from those frequencies on the human body. “Wearables with 3G or 4G connections built in, including the Samsung Gear S, could be more harmful, though that has not been proved,” it adds, noting Apple declined to comment for the article, and Samsung could not be reached for comment. Google is experimenting with cellphones in glasses in “Project Glass” which has been renamed “Project Aura.”

Limit Cellphone Use, Keep Base Stations Far Away

Other advice of Mercola is to keep the cellphone turned off except for emergencies and important matters. Using a landline at home and office is advised as well as keeping the base station of a cordless phone at least three rooms away from sleeping quarters.

He urges having a hard-wired Ethernet internet connection for computers, printers and peripherals since this is “not only safer for your health, but significantly faster and more secure.”

“If you must use a portable home phone, use the older kind that operates at 900 MHz,” he advises. “They are no safer during calls, but at least some of them do not continuously broadcast when not in use. Note the only way to truly be sure if your cordless phone is emitting radiation is to use an electrosmog meter, and it must be one that goes up to the frequency of your portable phone.”

“Avoid carrying your cell phone on your body, and do not sleep with it below your pillow or near your head. Ideally put it in your purse or carrying bag. Placing a cell phone in your bra or in a shirt pocket over your heart is asking for trouble, as is placing it in a man’s pocket if he seeks to preserve his fertility.”

There’s no such thing as a “safe” cell phone, he says. “A specific absorption rate (SAR) value for a phone only addresses one form of risk, the thermal effects, comparing one phone to another, and it is not a measure of biological safety. Frequencies, peaks, pulsing and other signal characteristics are also biologically active. The longer one is exposed the greater the risk. If you want to be safe, use hard-wired connections.”

Warnings Given on Wired Headsets

“Wired headsets will certainly allow you to keep the cell phone farther away from your body,” says Mercola. “However, if a wired headset is not well-shielded — and most of them are not — the wire itself can act as an antenna attracting and transmitting radiation directly to your brain.

So make sure the wire used to transmit the signal to your ear is shielded. Better headsets use a combination of shielded wire and air-tube. These operate like a stethoscope, transmitting the sound to your head as an actual sound wave. Although there are wires that still must be shielded, there is no wire that goes all the way up to your head.”