The BBC aired a program that showed a patient who was “visually very ill, claiming every ailment imaginable but totally unaware of the condition affecting him.”

The patient revealed that his job is working with Wi-Fi. He said he must “live” in his car because that is the only place where he does not feel ill.

After doctors at three hospitals said he was in perfect health and sent him away, he went to Holby City for help.

Symptoms were initially dismissed until one medical staffer searched the web and made a diagnosis of sensitivity to electromagnetic radiation. In the episode that was aired by Holby City, the patient found his symptoms were reduced “drastically” when he was put in a room with lower exposure to radiation. There is also a separate Youtube of the episode. 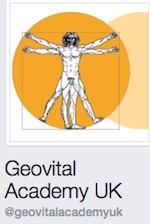 Geovital Academy, Braintree, Essex, U.K., has focused for 35 years “with great intensity on the cause and effect relationship between radiation exposure and its effects on health.”

“If even weak environmental influences affect the regeneration of the body and consequently its ability to fight disease, then the basis for health is significantly jeopardized,” it says. Its goal is the “successful health recovery of patients” using its own technology and approach.

Protection against radiation is “imperative” currently because of many recent developments, it says. The site covers the types of radiation and how they affect health and describes symptoms that are “clear indications of the presence of geopathic burdens.”

Geovital lauds the Holby City segment but says there are “far better solutions” to radiation sensitivity than suggested by the program.

“Merely turning off Wi-Fi is not going to remove all of it in most locations,” it says.

“There are phone signals from all the different communications companies, , different standards like 3G, 4G and soon 5G(!), directional transmitters on cellphone towers (the round drums enabling them to relay data from tower to tower), airport navigation equipment, radar, Wi-Fi from devices, toys, the neighbors or supplied throughout a city, power supply cables running up and down the street, to your house, in your house, solar panels, electric cars and much more.”

Rather than moving to the country to avoid radiation, Geovital recommends using “radiation shielding” products such as “Nova Shielding Fabric,” “T98 Shielding Paint,” and “GPA Shielding Mesh” that can be made part of walls, ceilings and roofs

The fabric can be used to shield windows or an entire room.

Geovital approves of the Holby City segment but says people should not wait until symptoms appear before taking steps to limit radiation exposure.

“Our body is a chemical miracle as much as it is an electrical miracle,” it says. “Many bodily functions rely on electrical impulses and electrical receptors. Exposure to radiation will start having effects much earlier, before even the most minor of symptoms start appearing.”

“A precautionary approach is advised when we don’t know what the long-term effects will be for our generation and even five generations later,” it adds. “We are all affected by EMF radiation exposure…but many of us are just not symptomatic yet.” A health advocate said people do not wait until they have a toothache to go to the dentist.

Since governments have been slow to take action on this health threat, “We have to take matters in our own hands and make sure our homes and families are protected,” it says.

Martin Kingsbury of Braintree, U.K., who has a solar power business, is campaigning to ban Wi-Fi from schools throughout the U.K., claiming their electromagnetic radiation is causing harm.

Countries such as Israel and France have already introduced Wi-Fi bans around children of a young age, says Kingsburg, who wants the U.K. government to take a strong stand against the radiation.

“Manmade radiation has increased hundreds of times in the last 30 years,” he says.

A campaign to shut down Wi-Fi’s in the U.S. similar to Kingsbury’s is being waged by the editor of this website. Erin McKinley, of 27east.com and the Southampton Press, interviewed this reporter on the steps of the Westhampton Beach Village Hall and reported our view that the Wi-Fi’s should be shut pending investigation.

The 27east.com story drew 11 comments totaling 1,983 words. Nine of the letters supported turning off the routers and two questioned whether electromagnet radiation is a danger. 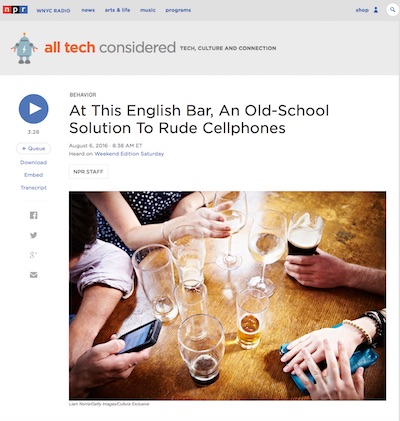 Such radiation is far too weak to alter human DNA, he said. Frequent exposure to much stronger rays such as X-rays or gamma rays would be needed to harm a person, he said.

The Gin Tub bar in Sussex, U.K., has turned itself into a “Faraday cage” that blocks anyone in it from making calls, sending or receiving emails, texting, surfing the web, etc.

“I think I’ve hit a nerve in the world, that I think it’s rude, and I think society has accepted people on their phones in bars and in places where it’s socially unacceptable,” he said. Without phones in their hands, customers are now not just drinking in silence but instead talking to each other, he says, adding, “That’s how bars were intended.”

Tyler knows of no other bar doing this but he feels this will be “the new way forward for restaurants, bars and clubs.