“The Accountant,” No. 1 box office hit starring Ben Affleck as an autistic accounting whiz, is manna for radiation health advocates who say it will focus attention on skyrocketing autism rates. 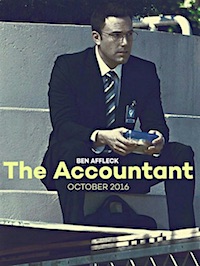 The number of autistic children has exploded from one in thousands several decades ago to one in 68, according to Centers for Disease Control & Prevention.

Autism is defined by CDC as a range of functional disabilities including lack of social skills, intellectual disability and language impairment. Victims may engage in repetitive movements or unusual behaviors such as flapping their arms or rocking from side to side.

Affleck is portrayed as a loner who has trouble relating to other people and who exhibits obsessive behaviors. An opening scene shows him as a boy intent on finding the last piece in a puzzle. Frustrated by something as an adult, he is shown hitting his calf repeatedly with some object. He is unable to form a romantic relationship with a woman despite her best efforts.

Supporters of victims of the “autistic syndrome,” who say those who have the condition are often portrayed unfairly, are demanding a boycott of the film.

Autistic children “should not be used as the ‘magic autistic’ type of storylines,” says fievent.com.

“Even though the movie may have innocent intentions, it feels hurtful to people like us,” says “Tom” of fievent.

Autism Speaks, largest autism advocacy organization with $57.4M in revenues in 2014, down from $69M in 2008, is under attack from critics who say it promotes fear of autistic people and spends little on them and their families.

The organization “uses damaging and offensive fundraising tactics which rely on fear, stereotypes and devaluing the lives of people on the autism spectrum,” it says. “Autism Speaks’ advertisements and ‘awareness’ campaigns portray autistic adults and children as not full human beings, but as burdens on society that must be eliminated as soon as possible.”

AS, based in New York with about 20 branches nationally, is supported by numerous major companies and institutions. Leading the list of 30+ supporters by donating more than $1M yearly are Alpha Xi Delta, women’s fraternal organization, Dollar General, and GameStop.

The AS financial report lists $115.1M in income for 2014 but this includes $51.2M in “in-kind” contributions mainly from ads, marketing and donated media. The ads are placed through the Advertising Council.

The Autistic Self Advocacy Network, whose slogan is, “Nothing About Us Without Us,” says AS ads, fundraising and “awareness” campaigns use “profoundly harmful language and rhetoric.”

It notes that it was not until Dec. 7, 2015, that AS appointed two autistic people to its board.

Companies on the board of 31 include current and former CEOs of Viacom, CBS, NBC, PayPal, Volvo, Virgin Mobile, priceline.com, and Sirius Satellite Radio, ASAN notes.

AS is also under attack by Wi-Fi health advocates who say it fails to mention pulsed electro-magnetic radiation as a cause of the “explosion” of autism from one in many hundreds to one in 68, according to statistics compiled by the Centers for Disease Control and Prevention.

Diane Hickey, Co-founder, National Association For Children and Safe Technology, said, “The growing rate of Autism diagnosis demands that organizations dedicated to the health and wellbeing of children immediately consider information that identifies wireless radiation as the cause.

“The EMF/Autism mechanism has been documented and I am dismayed by the lack of response and interest to knowledge that may turn the Autism tragedy around.”

Hickey said she supports the statement of boycottautismspeaks.blogspot.com which is urging Home Depot and 31 other companies and organizations to “terminate your financial support of Autism Speaks.”

The Boycott Autism Speaks website says AS "is a hate group spewing self-serving filth at the expense of the population it claims to serve." Those who support AS "are funding hatred, bigotry, and oppression. We, the Autistic people and loving families and friends of Autistic people are the casualties of the war you are subsidizing against our vulnerable community."

Martin Pall, Ph.D., biochemistry, Washington State University, says a cause of autism is microwave electro-magnetic radiation fields from routers, cellphones, computers, wireless iPads, cell towers, wireless utility meters and other sources. U.S. classrooms from the earliest grades have powerful Wi-Fi routers and many children have their own cellphones, says Paul, who authored a 42-page analysis of the biology involved when the body interacts with pulsed microwave radiation.

The paper is illustrated with many diagrams and graphics to show the points that Pall is making.

“Autism and wireless phone subscribers share virtually identical growth curves since the early 1980’s,” said Ed Friedman, Maine Coalition to Stop Smart Meters. “If autism organizations are not investigating this strong correlation for possible causation, it begs the question why not?” he asked.

“It is a tragedy that radiation is invisible!” said healthcare advocate Jerry Flynn of Canada. “If people could see it, they would immediately be on side with scientists who say that, ‘If you could see it; you could not see your hand in front of your face!’ Then AS could no longer deny/ignore EMF as being the likely cause of autism. In the meantime, AS, like the Cancer Society, creates a lot of high paying jobs for people who obviously know nothing about EMF.”

AS was founded in 2005 by Suzanne and Bob Wright, grandparents of a child with autism. He was vice chairman, General Electric, and also chairman and CEO, NBC Universal Co.

The AS website says it has committed more than $570 million to its mission, the majority in science and medical research. It has partnerships in 70+ countries on five continents.

Retired Canadian Army Captain Jerry Flynn says an “explosion of autism” in children in Canada appears to mirror the explosion in wireless technology.

He wrote May 22 to Prime Minister Justine Trudeau and members of the Canadian Parliament that the rate of autism in children in the U.S. was one in 25,000 before 1970.

Asks Flynn: “Why does no one connect today’s tragic explosion in autism in children with the comparable explosion in wireless technology? Each and every wireless device emits hazardous ‘low-level, pulsed, non-thermal radio/microwave frequency radiation.’”

“Tragically,” he said, “for all Canadians, the Government of Canada refuses any dialogue whatsoever on pulsed non-thermal wireless radiation, which scientists have long linked to autism and a host of other neurological diseases, as well as diseases of the central nervous system.”