While many marketing professionals appear to exhibit trepidation regarding the effects artificial intelligence may have on business, most nonetheless are willing to embrace the technology, an outlook shared by most consumers around the globe. 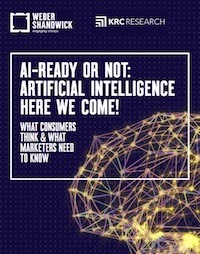 The findings come from global research commissioned by PR giant Weber Shandwick. The report, titled “Al-Ready or Not: Artificial Intelligence Here We Come!” surveyed marketing and branding executives as well as consumers in five global regions in an effort to gauge current perceptions and opinions regarding artificial intelligence and how consumers and industry professionals alike see this technology affecting life and business in the future.

While 64 percent of chief marketing officers expressed concern regarding AI and 45 percent believe AI will result in a reduction of industry jobs overall, about seven in 10 CMOs — 68 percent — said their company is planning or already doing business that accommodates artificial intelligence. Moreover, more than half — 58 percent — believe companies will need to embrace AI and work in these spaces in some capacity within the next five years in order to be competitive, and 55 percent believe AI will have a greater impact on marketing and communications than social media.

More than a third — 39 percent — admitted anticipating difficultly communicating the benefits of machine intelligence, and 40 percent said AI would require staff with a vastly different skill set that what most companies offer currently.

Consumers appear to mirror these attitudes. The Weber report shows that while nearly two-thirds — 64 percent — of global consumers said they have at least some concern regarding the use or adoption of AI, they’re seven times more likely to feel optimistic regarding AI’s impact on society than otherwise.

Consumers especially value the concept of AI being used to carry out tasks that are too dangerous for humans, but seem most trusting of AI when it comes to fulfilling simple tasks such as providing travel directions and entertainment, or offering reminders to take medicine. Tasks most consumers feel should not be handed over to AI include flying airplanes, performing a medical procedure and handling childcare or babysitting duties.

Like CMOs, the majority of consumers — 82 percent — expect jobs to be lost amid AI adoption, and consumers also expressed concern regarding nefarious uses of AI technologies, such as cyber-attacks or computer hacking.

However, while almost all global consumers — 92 percent — said they expect AI to arrive eventually, the report also suggests many still know little about the technology: more than a third — 34 percent — of consumers admitted knowing nothing about artificial intelligence. When asked to elaborate on their understanding of AI, most consumers said they associate AI with “robots” and few were able to name a single company making forays into the world of AI technology today. A clear majority — 80 percent — said their understanding of AI comes from some form of media (primarily a mix of Internet, social media, TV, movies and the news), and 59 percent said they'd seen or read something about AI in the media within the past month.

Finally, the report suggested consumers living in China posses a greater understanding of AI than consumers surveyed in other countries. Chinese consumers were also ranked as some of the most optimistic regarding the impact AI could have on society and people's personal lives, suggesting that the more consumers know about AI, the more positive their outlook on the technology's social impact.

The report was conducted in June by opinion research and strategy firm KRC Research. It surveyed 2,100 adult consumers online in the U.S., Canada, China, UK and Brazil, and also surveyed 150 CMOs in the U.S., UK and China employed by companies with annual revenues of at least $500 million.

Artificial intelligence was the topic of discussion at an October 19 Communications Week panel that discussed what effects automation could have on jobs in the PR industry.