The Centre for Corporate Public Affairs, based in Sydney, Australial, and Hong Kong, headlines in its newsletter that "PR is Dead." (PDF) 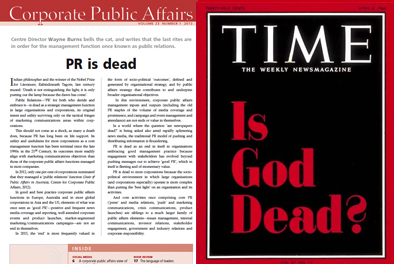 At least Time made it a question. The cover, the first ever by the mag with no graphic and only text, created an uproar. It generated a record number of letters-to-the-editor.

CCPA, which has 120 corporate, association and government individual members who pay dues of $3,500 yearly (similar to Arthur W. Page Society in the U.S.), states flatly that PR is dead.

We agree that corporate/institutional PR is just about dead in terms of responding to press questions which was PR’s original promise made by Ivy Lee in 1906.

All press questions were to be answered "most cheerfully."

Almost all of the activities that fell under formerly large corporate PR departments have gravitated to PR firms and especially the press relations part.

Corporate PR people, who experience a press call as a "drive-by shooting" in the words of one veteran PR/IR executive, have mostly washed their hands of dealing with the press where a mistake can cost them their jobs.

Corporate PR heads mostly hide behind "underlings" who deliver "slop," said New York Times columnist David Carr. Almost all PR heads are hidden from view. Not even their names are available on company websites and definitely not their direct dial phones or e-mails.

Institutions have apparently decided that there is already too much information available, it is too easily bucked from place to place, and modern electronics gives it permanent life.

The PR counseling industry, on the other hand, is thriving. Fifteen of the 25 biggest PR firms, had double-digit gains in 2012 led by Edelman which grew 12.4% to $655 million. They provide tax documents to support their fee income and employee totals.

Edelman's total is more than five times the size of the next independent, APCO Worldwide with fees of $121.8M.

The O'Dwyer rankings drew input from 124 independent PR firms which included virtually all of the major firms. Again not participating, following a policy they started in 2001, are the PR units of the conglomerates—WPP Group, Omnicom, Interpublic and Publicis. They claim that Sarbanes-Oxley won’t let them reveal figures.

Growth of PR firm revenues overall and in 12 specialized categories such as healthcare, tech and financial, has been robust each year.

The talent in PR has gravitated to PR firms where independence and creativity flourish. The same thing happened to corporate ad departments in the 1950s and 60s. Almost all were disbanded when companies found that their ad units, although freed from paying commissions to ad agencies, were no match for the creative output of ad agencies.

The New York Times, in a nearly full-page feature in 1987, covered the shrinkage of corporate PR departments and the growth of PR firms.

A disturbing trend is for organizations not only to refuse cooperation with press coverage but to attack reporters by any and all means.

This is a worldwide phenomenon that has caused alarm at UNESCO, which in 2012 published a 51-page report on interference with press coverage, saying murders, jailings, lawsuits and harassment of one sort or another are common and done with "impunity." Governments and institutions look the other way, says the report.

In the U.S., the two biggest PR trade groups, PR Society of America and the International Assn. of Business Communicators, openly battle their trade press reporters.

Robin McCasland, IABC chair, in June compared reporter critics to dogs in the park. The PR Society, whose last press conference was in 1993, blocked reporters from its Assembly in 2011-12. PRSA attempts to discredit press critics. Few press questions, particularly those dealing with finances, are answered by either.

Wayne Burns, who joined the CCPA as director in 2005 (PDF) after more than 20 years in corporate PA, journalism, politics and publishing (including a stint with Hill & Knowlton and heading his own firm, The Millenium Group), is the author of the five-page article.

He says PR "is dead as a strategic management function in large organizations and corporations, its original intent and utility surviving only on the tactical fringes of marketing communications areas within corporations."

He feels PR has long been "on life support, its utility and usefulness for most corporations as a core management function has been terminal since the late 1990s: in the 21st Century, its outcomes more readily align with marketing communications objectives than those of the corporate public affairs functions managed in most companies."

What was once seen as "good PR," he says—"positive and frequent news media coverage and reporting, well attended corporate events and product launches, market-segmented marketing/communications campaigns—are not an end in themselves."

In 2013 the "end" is most frequently valued in the form of "socio-political outcomes defined and generated by organizational strategy, and by public affairs strategy that contributes to and underpins broader organizational objectives."

Pick up the Phone

Burson-Marsteller founder Harold Burson, accepting the Paladin award for courage in communications in 2012, said PR has four duties—to listen; to be the corporate conscience; communicate (i.e., answer questions), and serve as "ombudsman" representing what is in the public’s interest to companies.

Richard Edelman, accepting the same award in 2013 in behalf of his late father, Daniel, said PR has "evolved" and is taking on societal issues such as hunger and nutrition, job creation, aiding returning veterans, and improving high school graduation rates.

As noted above, it’s hard to find anyone in a corporate PR unit who will pick up the phone and engage in a conversation. Almost all dialogue, called "dialogic looping" by the PR Society Educators Academy, is via e-mails. F2F (face-to-face) contacts have just about vanished.

The stress on the "socio-political environment" that is in the CCPA article suggests that members are interested in law-making and law-enforcement.

In the U.S., corporations are concentrating on what laws are passed and/or enforced rather than what public opinion may be.

One vehicle for this is the American Legislative Exchange Council, a group of 2,000 state legislators and 300 corporate reps that prepares "model" bills for state legislatures.

Lawmakers in the group are almost 100% Republican, according to PR Watch, which accuses it of illegally engaging in lobbying without registering as lobbyists.

The best way to understand PR/PA policy is to start at the top—the CEOs.

CEO pay at 200 major companies has risen 875% since 1978 to a median of $15.1 million while pay of the average U.S worker has risen 5.4%, according to research conducted by Equilar for the New York Times. CEOs who used to make 20X what their workers made now make more than 500X.

A story titled "That Unstoppable Climb in CEO Pay" that occupied more than three pages of the Sunday, June 30 NYT showed the pay packages of CEOs of 200 companies with sales of $1 billion+.

Among those on the list, with $40.7 million in pay and stock option gains in 2012, was John Wren, CEO of the Omnicom Group, parent of FleishmanHillard, Ketchum, Porter Novelli and other PR firms.

The article, by Gretchen Morgenson, notes that many companies have "princes" that get nearly as much as the CEOs.

At Omnicom, CFO Randall Weisenburger pulled in $44.3 million in 2012 in pay and via cashing in options.

Attempts by us to discuss the pay packages of OMC with staff VP-PR Joanne Trout went nowhere. OMC is in PR lockdown.

Similar roles are no doubt carried out by PR staffers at the 200 companies in the Equilar list. CEOs do not want to discuss their huge pay packages. Press conferences have about disappeared from the corporate scene.

Besides studying the five-page article on the "Death of PR" in the CCPA Newsletter, PR practitioners should also read the 10,000-word "Annual Oration" that Alastair Campbell, spokesperson for U.K. Prime Minister Tony Blair from 1997-2003, gave to CCPA June 27 in Melbourne.

Campbell, in a wide-ranging treatise on the state of current PR, says PR people are "bad" at their own PR and are being replaced by superior "spinners" -- journalists.

Campbell and the Blair government in 2011 were accused of lying to the British public about the existence of "weapons of mass destruction" in Iraq. The basis of the charge was evidence that was declassified.

Campbell cited Queen Elizabeth II as "one of the great strategic communicators of our time."

Said Campbell: "She is the embodiment of lesson one -- you just keep going. And here’s something interesting. She has never ever given an interview. But she sure as hell has had an objective -- to stay there, not least here in Australia. And she sure as hell has had a good understanding of strategy in meeting that objective, as Murdoch, Turnbull and many others will testify. And every time she landed a dot, in what she wore, how she spoke, where she went, what she did … she pretty much said the same thing, again and again and again."