The ninth annual study of the largest public companies in the U.S. shows that the proportion of market capitalization attributable to the confidence inspired by their reputations increased 2.5 percentage points to an average of 20.7 percent across the index. 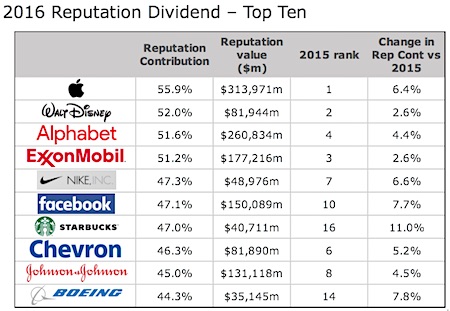 Apple held onto the top spot with its reputation value coming in at close to $314 billion. Walt Disney came in second and Alphabet (Google) takes third, bumping down ExxonMobil.

Starbucks’ 11 percent rise in reputation contribution got it into the top 10 for the first time at number seven.

AT&T and Occidental Petroleum dropped out of the top ten.

“We are witnessing the fact that investors are now giving an increasing nod to the ‘safety’ and assurances they infer from compelling corporate reputations,” Sandra Macleod, Reputation Dividend director said.

The study also broke down the impact of various business sectors on reputation.

Telecommunications is the most influential at 34 percent. Utilities are at the bottom with a contribution of 13 percent. 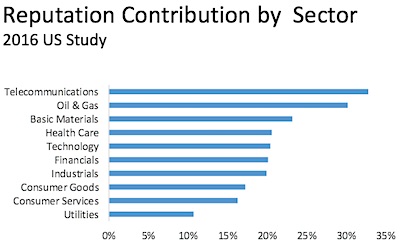 “Telecommunication companies, characterized by the likes of AT&T and Verizon, operate in a mature and closely examined sector. A large degree of the ‘faith’ in stock performance is dependent on companies’ reputations which are, therefore, disproportionately influential,” Bob Takacs, Reputation Dividend senior VP, said.

Reputation Dividend is the only recognized index of the financial value of corporate reputation as measured as a percentage of market capitalization.

This latest study covered 360 of the largest public companies in the U.S. based on data reported up to March 2016.