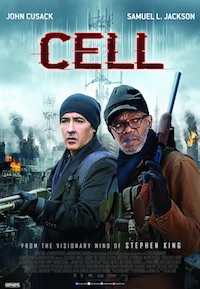 “Cell” is a 2016 horror movie about cell phones based on a Stephen King novel that may focus more public attention on the ubiquitous but dangerous devices.

Gaining government or school notice of the issue has been almost impossible thus far. “Cell,” starring John Cusack and Samuel Jackson, is now available in video on demand.

Cecelia Doucette and Keith Marciniak of Ashland, Mass., who have created a five-part video series on the dangers of pulsed microwave radiation, say they got nowhere with school and public officials when they sought recognition of the problem.

“They told us they can’t go backwards on Wi-Fi and that children must have a 21st-century classroom and all the most modern tools,” says Doucette. She was “thrown for a bit of a loop” when she made a presentation to a school committee that included “very smart people”—technologists, teachers, professionals, etc., and got rebuffed. Her remarks are at the nine-minute mark of the first video. 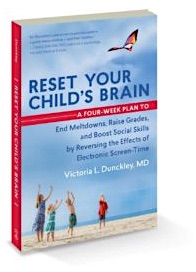 It is subtitled: "A Four Week Plan to End Meltdowns, Raise Grades and Boost Social Skills by Reversing the Effects of Electronic Screen-Time."

Dunckley says increasing numbers of children are being diagnosed with psychiatric disorders such as ADHD, Tourette’s, autism, depression and bipolar disorder. Other children have no formal diagnosis, yet seem out of control or stuck in terms of development. At the same time, more children are being prescribed “psych meds,” requiring special education, or receiving speech or occupational therapy. Disability benefits for mental and neurological disorders now dwarf every other disability category.

She believes such trends are linked to the daily barrage of stimulating screen-time on the sensitive nervous system of growing children. She urges parents to understand the science behind her conclusions.

Especially at risk because of the DNA-changing radiation are male sperm and female eggs, says Doucette. Research has shown a decline in sperm count and sperm motility after only four hours of exposure to cellphone radiation, she said.

Males can produce sperm throughout their adult lives but females only have the limited amount of eggs they are born with, she noted. “Ask Alice” explains the nature of sperm and female eggs:

“Unlike sperm, which are produced daily throughout a lifetime, human eggs are finite and found in the two ovaries. Ovaries, at birth, contain about one to two million immature eggs, or follicles.

“Over a lifetime, most follicles will die through a process known as atresia. Atresia begins at birth and continues throughout the course of the reproductive life. When puberty is reached and menstruation begins, only about 400,000 follicles remain."

“With each menstrual cycle, a thousand follicles are lost and only one will mature into an ovum (egg), which is released into the fallopian tube, kicking off ovulation. That means that of the one to two million follicles, only about 400 will ever mature. Relatively little or no follicles remain at menopause, which usually begins between 48 to 55 years of age.”

“Cell,” based on a 2006 book by King, tells how people are driven insane when they use their cellphones. An alien force takes over their minds and in some cases, instructs them to kill anyone nearby. In other cases, they are ordered to march in groups toward certain destinations.

The plot follows three people lucky enough not to have used their cellphones—two males and a 15-year-old girl.

They head north from Boston towards a town in New Hampshire where Clayton Riddell, played by Cusack, hopes to find his son alive at a school. Jackson plays Tom McCourt and Isabelle Fuhrman plays Alice.

Thousands of infected people are observed walking in groups and the trio theorizes that some kind of force is directing them by having access to their minds.

Stacey Keach plays Charles Ardai, headmaster of the Gaiten Academy in N.H., who says of cellphones: “I never liked the things, especially in an academic environment. I might have moved to keep them out of the school but would have been overruled. Might as well try to legislate against the rising of the tide…they emit radiation, are you aware of this? In minuscule amounts, it’s true, but still…a source of radiation that close to one’s head…one’s brain…”