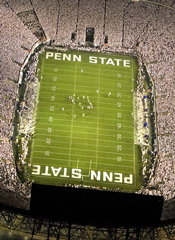 Penn State has signed Edelman and La Torre Communications, a Harrisburg-based PA firm, to a one-year contract pegged at $208K a-month to guide the recovery from its sex scandal.

The mission is to ensure a broader and more transparent communications with stakeholders such as facility, more than 500,000 alumni, students, staff, parents, local communities and the national media.

Retaining these communications firms puts us more firmly on the path toward accountability, openness and preserving our reputation as one of the worlds leading research universities, said a statement from president Rodney Erickson.

Ketchum worked with Penn St. in the aftermath of the scandal breaking last year, while Kekst and Company represented a special committee of the school's board.