PR firms have been buzzing about the opportunities offered by paid content or “native advertising,” which is the digital form of advertorials. 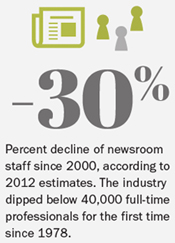 A survey released today by Pew Research Center’s Project for Excellence in Journalism bears out Edelman’s enthusiasm for paid content.

Pew frets that some news outlets are concerned that some readers can’t differentiate between sponsored stuff and “real news.” That’s a concern that the reeling newspaper business cannot worry too much about. There’s a much more pressing concern. It’s called survival. Pew found that newsroom employment sunk below the 40K mark last year for the first time since 1978. Employment is off 30 percent from the industry’s peak of 2000.

For the past couple of years, newspapers have been filled with stories about the “death of the business” or at least the massive transformation of the media landscape.

Unfortunately, the hard truth is that readers care little about the trials of the media world. Life is tough all over these days. More than 60 percent of the respondents to Pew’s survey say they have either heard nothing or little about the financial squeeze facing news organizations.

More than 30 percent, however, have stopped relying on a news outlet because it fails to provide them with the news they used to get. Those readers are skewed toward the more educated and higher income demographic, the target audience most savored by advertisers.

Those are the advertisers that are bound to jump on the paid content bandwagon, which is sweet news for the PR business.