The document, which the Millennial-focused online news and entertainment site characterized as “largely innocuous,” was allegedly assembled by Definers and details Soros’ potential ties to several prominent progressive groups that have since banded together to form “Freedom From Facebook," a grassroots coalition that accuses the social media platform of “killing innovation and choice,” tracking its users “almost everywhere we go on the web,” and buying up or bankrupting potential competitors “to protect its monopoly.”

The group calls on the Federal Trade Commission to break up Facebook-owned services WhatsApp, Instagram and Messenger into separate units in the hopes of giving users more control over their data. It was formed by at least a half-dozen progressive groups, including the Open Markets Institute, MoveOn Civic Action, SumofUs and Citizens Against Monopoly. 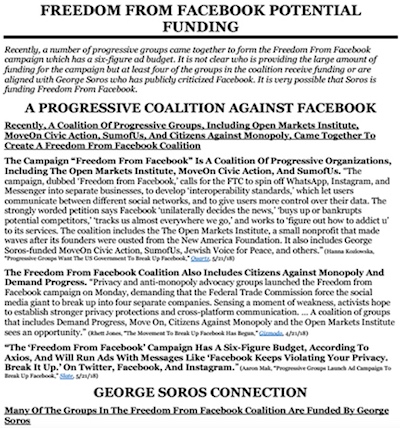 “Recently, a number of progressive groups came together to form the Freedom From Facebook campaign which has a six-figure ad budget,” the document begins. “It is not clear who is providing the large amount of funding for the campaign but at least four of the groups in the coalition receive funding or are aligned with George Soros who has publicly criticized Facebook. It is very possible that Soros is funding Freedom From Facebook.”

Political, business, tech website Axios in November reported that the “initial donor” behind the Freedom From Facebook campaign was David Magerman, a Pennsylvania philanthropist and former hedge fund executive. Magerman has reportedly given more than $400,000 to the campaign.

On Nov. 21, Facebook’s policy and comms. head Elliot Schrage released a statement detailing Definers’ work for Facebook, which included “sending … press clippings, conducting research, writing messaging documents, and reaching out to reporters,” as well as asking the firm to help the tech company better understand the Freedom From Facebook campaign. Schrage took responsibility for hiring Definers, and pushed back against the characterization of the agency’s work as “opposition research.”

Schrage, who came under fire for Facebook’s response to the Cambridge Analytica scandal, announced he was stepping down in July. He will be succeeded next year by former UK deputy prime minister Nick Clegg.

According to the BuzzFeed report, the document it had obtained is “one of at least two files prepared” by Definers for Facebook, and reported that, “according to multiple sources,” there is “at least one other, longer Definers document involving Soros.”