The master of distraction and self-described "least racist person anywhere in the world" launched his off-the-wall attacks on Baltimore Congressman Elijah Cummings after watching a 6 a.m. "Fox & Friends" report on July 27, according to the Washington Post.

President Trump really should catch up on his sleep.

His racist tirade against the long-time Democratic Congressman and the city of Baltimore began two days before the House Oversight Committee, which is chaired by Cummings, unveiled its second interim report on "corporate and foreign interests behind the White House push to transfer US nuclear technology to Saudi Arabia."

The Report is a barnburner. 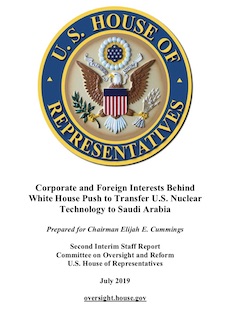 "Overall, the new documents obtained by the Committee reveal that, with regard to Saudi Arabia, the Trump Administration has virtually obliterated the lines normally separating government policymaking from corporate and foreign interests. The documents show the Administration’s willingness to let private parties with close ties to the President wield outsized influence over U.S. policy towards Saudi Arabia. These new documents raise serious questions about whether the White House is willing to place the potential profits of the President’s friends above the national security of the American people and the universal objective of preventing the spread of nuclear weapons."

The Report says Tom Barrack, Trump's personal friend, campaign donor and inaugural chairman, concocted a plan to buy Westinghouse Electric Corp, the only US maker of large-scale nuclear reactors, using cash from Saudi Arabia and United Arab Emirates, while he was lobbying to become a special envoy to the Middle East and Ambassador to the UAE. There would be enough US ownership in Westinghouse to bypass scrutiny from the Committee on Foreign Investment in the US.

In a statement, chairman Cummings said the Report "exposes how corporate and foreign interests are using their unique access to advocate for the transfer of US nuclear technology to Saudi Arabia.

"The American people deserve to know the facts about whether the White House is willing to place the potential profits of the president's personal friends above the national security of the American people and the universal objective of preventing the spread of nuclear weapons."

Instead the American people are debating whether or not their president is a racist, an argument that diverts attention from Trump's reign of corruption.