And the winning medium for the Social Media age is . . . video.

According to a recent study by Adobe, videos now account for 77 percent of viral reach on social networks. This means that people are twice as likely to engage in video content as in text-based communications.

So video must play a major role in any social media PR strategy. Stated another way, if you want to reach the vast audience that comprises social media, you need to create video.

Traditionally, of course, PR was based on earned media, or so-called "free" media, created and controlled by objective third parties, who occasionally – when you were lucky! – "endorsed" your product or organization.

Such earned media was far superior to paid media, traditional advertising paid for by the advertiser itself.

Today, with social media, PR professionals have added owned media, where content is placed on properties owned by the sponsoring organization, from blogs to Twitter accounts to Facebook pages.

One of the pioneers in the use of branded content is former TV journalist, Christy Ferrer, who founded her video branded content agency, Vidicom, in 1981. For more than three decades, Vidicom has been creating video for organizations that control the content. Today, Ferrer's company produces branded video solutions – live, taped and interactive – for more than 500 brands. She has been creating video for paying customers. Recently, she shared her approach to the latest PR playing field.

How did Vidicom get started in the days before social media? 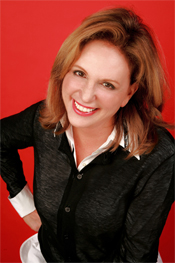 Christy Ferrer: We were one of the first video tape fashion shows. Designer houses paid us to distribute footage to TV newsfeeds and other outlets. This beginning has graduated to today working with clients to speak to consumers and others through social media and interactive TV.

What's the first step in working with a company on its video approach?

CF: First, a company must recognize the importance of having a constant and consistent presence on video. Companies need specialists to ensure consistency in video quality and amortize distribution through tactics including in-house archiving and repurposing – using existing video for new purposes.

CF: We handle the whole process, from reviewing strategy on content objectives to streamlining the creation of content to creating the video to distributing and then implementing a repurposing program.

What do you mean specifically by "repurposing?"

CF: Once a brand has paid for video content creation, it needs to think about maximizing its distribution on earned, paid and owned media outlets. Content might begin with live satellite media tours with TV journalists. This can morph into live interactive webcasts between brand spokesmen, who engage directly with a brand's fans on social platforms like Facebook. Beyond this, you can create snack- sized videos are from this content for further distribution. For example, we work with a variety of outlets, from web platforms to taxi cab minutes to archives that exist on a brand's social and on- line platforms.

Do you work with full-service PR agencies?

CF: All the time.Of the 400 pieces of branded content Vidicom creates each year, most of it is paid for with PR dollars. Typically, the brands we work with have social, advertising and digital agencies, besides PR firms. All video initiatives and assets are typically amassed at the brand manager or CMO level for monthly video solutions conference calls among the video team and all agencies to maximize video assets.

How do you differentiate yourself from competing video brand producers?

CF: We have a roster of paid distribution partners that makes us different. These include AOL, WNBC, ABC, NBC, taxi cabs, hotels and a myriad of others. We also work to innovate with new video tactics. Our newest and most popular at the moment is INTERACTV, which streams interaction between a brand spokesperson and its fans on its social platforms. Examples are more traditional, like Disney promoting its resorts or Calvin Klein demonstrating the proper way to fit a bra, to more novel uses. In this category, I'd point to the work we've done with the American Association of Retired People (AARP). AARP teamed Vidicom with former Today Show host Jane Pauley to rebrand a broadcast series, "Life Reimagined." We've worked to continue Jane Pauley's broadcast conversations from Vidicom's live studios, where we stream her comments to the AARP community, with which she interacts via skype.

The point is that with every new social media/communications wrinkle, firms like ours can expand their business model. Brand-oriented video is a constantly-evolving field.