Russian president Vladimir Putin, who uses Ketchum for PR, earned a powerful New York Times op-ed placement today, in which he warned that a U.S. strike against Syria would destabilize the Middle East and northern Africa. 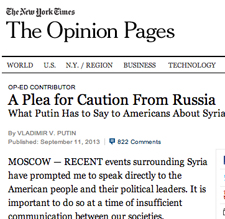 As representative of the Russian Federation, Ketchum has worked the U.S. press (NYT, Wall Street Journal, NPR, Bloomberg, Associated Press, Wired, Forbes and Time) during the six months ended May 31 on a range of matters including the G-20 summit in St. Petersburg, Sochi Olympic Games, infrastructure developments, agricultural policy and drug enforcement.

Russia paid Ketchum $1.9M for its services, according to federal records. That outlay included a $70K disbursement to the shop of Republican message firm Maslansky Luntz & Partners.

Putin's placement knocked the U.S. for military intervention in the internal affairs of foreign countries, which he called "commonplace."

Putin wrote that it’s “extremely dangerous to encourage people to see themselves as exceptional.

A Ketchum staffer told O'Dwyer's "the opinion piece was written by President Putin and submitted to the New York Times on his behalf by Ketchum for their consideration."

The Guardian reports that Putin penned "the basic content" of the piece, which was then fleshed out by his aides.