CEOs who take a controversial political stance are practically guaranteed to wind up in the news cycle, but as it turns out, these actions rank far lower on the outrage hierarchy for the average consumer when compared to faulty products, lying to shareholders or deliberately misleading the public, according to a report released by digital politics and policy outlet The Morning Consult.

The report, which sought to gauge the types of brand controversies that offend consumers most, presented respondents with a list of 16 hypothetical brand controversies, and asked them to rank which would result in the most damning view of a company. Companies that deliberately mislead the public and companies caught falsifying accounting records to boost profits were seen in the worst light. This was followed by companies that lie about how their products work, companies whose products could potentially harm consumers and companies caught lying to shareholders.

Interestingly, even though it’s the kind of the material that drives today’s news cycle, the controversy least likely to upset consumers involved a CEO taking a political stance with which the respondent personally disagrees. 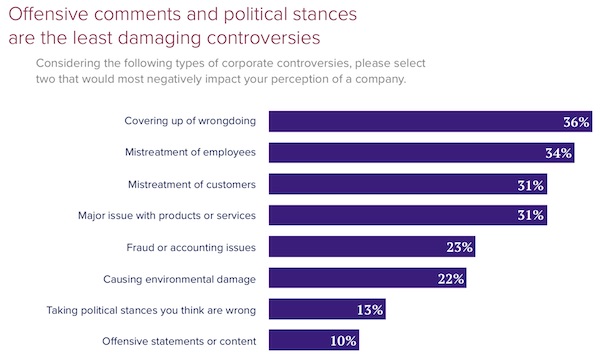 The Morning Consult report also broke down corporate crises into eight different categories, and asked respondents to rank which would most negatively impact their perception of a company. When it comes to the scandal most likely to polarize consumers, covering up wrongdoing took the number-one spot. This was followed by employee mistreatment, customer mistreatment, major issues with products/services and fraud. Once again, making offensive statements or taking a political stance a consumer happens to personally disagree with rounded out the bottom of the list.

As it turns out, actions speak a lot louder than words when it comes to regaining consumer trust in the wake of a crisis. When asked to list the responses most likely to win back their trust, launching an internal investigation and making a public pledge to ensure the same mistake won’t happen again topped the list of strategies consumers prefer crisis-stricken companies take. This was followed by issuing customer refunds. Formal apologies, a staple of the crisis management toolkit, appear to often fall on deaf ears, as it appeared third from last on the list. Donating money to a relevant charity and firing the CEO was seen as the least effective strategy for handling a crisis.

A strong majority of respondents — 78 percent — also said they’re more inclined to view a company in a favorable light when a crisis is followed with the appropriate response.

The report also found that respondents identifying as Democrat were far more likely to abstain from a scandalized company’s products or services than those identifying as Republican (55 percent vs. 39 percent, respectively). And Baby Boomer respondents comprised the generation most likely to pay attention to company scandals of a political nature (70 percent), compared to 59 percent of Gen Xers, 58 percent of Millennials and 38 percent the Gen Z generation.

The Morning Consult’s report, “How to Identify and Survive a Brand Crisis,” relied on data culled from responses to online interviews with more than 2,200 U.S. adults in October.