Parents across the U.S. are revolting against tests prepared by Pearson, McGraw-Hill and others that many of their children are flunking and may result in their being held back. 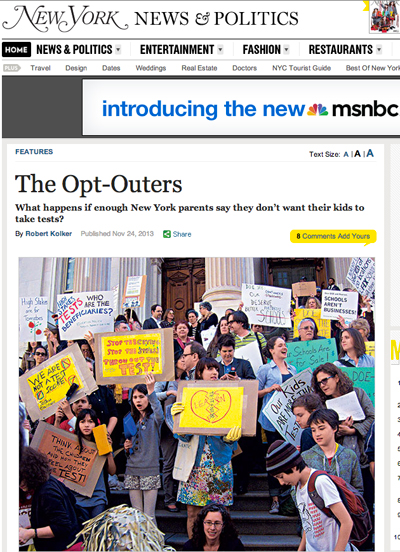 The Dec. 2 New York mag devotes seven pages to the controversy under the title, “The Opt-Outers” (parents who refuse to let their children take the tests).

A two-page illustration shows parents and children demonstrating outside the U.S. Dept. of Education in April, holding signs such as “Schools Aren’t Businesses,” “High Stakes Tests—Who are the Beneficiaries?” and “Our Schools are for Sale.”

Complaints are that teachers were not adequately prepared for the new tests which resulted in students also not being prepared.

Pearson, the largest private business educational supplier with $8.9 billion in revenues, has been under attack from a number of quarters including former U.S. Assistant Secretary of Education Diane Ravitch, author of Reign of Error, which attacked Pearson and other business suppliers to education; Gail Collins of the NYT, and the website bigeducationape.

PR Watch has published an extensive examination of the activities of Connections Academy, a division of Connections Education which is owned by Pearson.

Valerie Strauss of the Washington Post wrote yesterday on the topic, “Brace yourself: Pearson has a ‘new global education strategy.’”

The New York article tracks the plight of seven-year-old Oscar Mata of West Harlem whose parents were told in 2011 that he was failing and faced being held back.

The “Common Core” standards that were introduced are the Obama Administration’s “way of sealing in the quality-control demands of ‘No Child Left Behind,’” a program that was instituted in 2001, says the article.

Author Robert Kolker says 320 children have “opted-out” of the testing, based on New York Dept. of Education records.

Michael Mulgrew, president of the United Federation of Teachers, called New York “the test-prep capital of the U.S.” and has started a petition to ban the use of standardized tests for pre-K through second grade.

Forcing the issue with teachers is that their pay raises are dependent on how many of their students pass the standardized tests.

The CUNY Graduate Center for several years has hosted a group called the “Grassroots Education Movement” which includes public school teachers and parents who talk about educational policy issues.

Groups from other parts of the country that have been advocating boycotting the tests include “Fair-Test” and “United Opt-Out National.”

“Time Out From Testing” was organized in New York but is not urging a boycott of the tests.

Jane Hirschmann, a leader of the group, told New York that

“We didn’t feel there was a handle for parents to understand what they were boycotting.”

Jane Maisel, City College instructor and former city school teacher who is a member of “Change the Stakes,” told New York: “They’ve set up a situation where people are terrified to do anything but teach to the test.”

PR Watch says there has been an “explosion” of virtual schools in recent years, noting they are also called “internet schools,” “cyber schools” and “online schools.” They replace or supplant “brick & mortar schools.”

Citing a database of the National Conference of State Legislatures, PRW says that from 2008-12, legislatures of 39 states passed 157 bills that expand online schooling, regulate virtual education, or modify existing regulations.

Many of the pieces of legislation had their birth via the American Legislative Exchange Council, says PRW.

It charges that ALEC, made up of mostly Republican legislators and business executives, is actually a lobbying group although it is not registered as such.

New York Mayor Michael Bloomberg announced in 2011 that Pearson would relocate 600 jobs to NYC by the summer of 2014.

Employees would be moved from Upper Saddle River, N.J., and White Plains, N.Y. Pearson also plans to create “new media and technology jobs,” said the announcement. Bloomberg called it “a big victory for New York. In these tough economic times, we’re doing everything we can to attract companies and private investment to our city.”

Pearson is leasing space in a newly renovated building at 330 Hudson st. in the Hudson Square neighborhood. The company is getting $9 million in tax credits from New York state and $4 million in discount electricity as “sweeteners” to encourage the move to NYC.

Pearson is also getting $84 million from New Jersey to move 700 jobs to Hoboken from Upper Saddle River, said the WCBS 880/AP story.

The website wiredacademic.com wondered how officials from the two states could be “quite pleased” with the deals when “the net gain in jobs for the New York metropolitan area would be close to zero.”

Pearson is getting $84 million in cost savings to take more than 1,200 jobs out of Upper Saddle River by 2014 and move more than 600 of them to Hoboken, it noted.

“One of the stated reasons for New Jersey’s largess was to keep all those jobs from going to Manhattan,” said wiredacademic.