The cover up isn’t “always” worse than the crime – just ask Tiger Woods or Anthony Weiner.

But in this case, it’s the coup de grace. 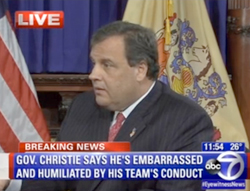 Chris Christie – indomitable, indestructible, unyielding – has raked himself into a pile of muck from which he likely won’t emerge – at least not enough to become the Republican nominee for President.

And he owes it all to his big, large self.

Gov. Christie, of course, denied for months that he or his administration had anything whatsoever to do with the inexplicable September shut down of George Washington Bridge access lanes.

“Of course, we had nothing to do with it,” insisted the outspoken governor.

“Of course, there was no retribution against the Fort Lee mayor who didn’t endorse me.”

“Yeah, I got out there and personally moved the cones!”

All vintage Christie – pugnacious as ever, deflecting another set of scurrilous accusations designed to take him down.

Only this time, the accusations weren’t just scurrilous; they were true.

And while the governor now flails through embarrassing mea culpa press conferences and interviews, apologizing and blaming with furious anger the associates whose “unsanctioned conduct was made without my knowledge,” the damage, she is done. Nobody cares who he fires, how he reacts, or how “heart broken” he is that someone betrayed his “circle of trust” (Who is he, Bobby DeNiro??)

Gov. Christie, no matter what really happened, how much he knew or what he says, is damaged goods; so damaged that he likely won’t be nominated for Republican presidential candidate any time soon.

Any of us who stick our necks out, are categorical in our decisions, and sometimes defy the common wisdom, are flying without a net. That’s why most politicians – and most people – are politically correct, mealy-mouthed, and generally go with the flow. In politics, as in life, if you live by the sword, you die by the sword.

Christie is well known for being arrogant and vindictive. One need only watch his many bullying YouTube performances to see how viciously he can eviscerate a skeptic. That was all good as long as he basically delivered on what he claimed.

But now that his administration’s performance is revealed as counter to the “bipartisanship” he preached, Christie’s arrogance becomes an issue.

And while Americans will put up with a lot, most of us won’t abide arrogance. That’s a political campaign killer.

Gov. Christie’s strong suit was “competence;” he got out there and battled Hurricane Sandy, he put down the teachers’ union, he made the trains run.

The buck stopped with him.

Until the George Washington Bridge did him in.

Now, sadly, he blames his associates for keeping him in the dark. He knew nothing. They duped him. The old team wasn’t loyal. They didn’t let me in on it.

You mean to say that despite the many months that this scandal dominated the headlines and his many denials of administration involvement, Gov. Christie, after all this time, had “no knowledge” of who did what to whom?

He’s either lying or incompetent.

Either way, he’s dead meat to the Republicans.

Finally, and most damning of all, with this ultimate Democrat gotcha, Chris Christie revealed himself as just another greasy politician; prevaricating, covering up, saying one thing and doing another and then apologizing for getting caught.

Prior to all this, of course, the signs were already clear that while Christie talked a good show, he wasn’t much better than all those other bottom feeders who populate the U.S. Congress.

Specifically, Christie called a special U.S. Senate election in October for shoe-in Corey Booker, rather than adding Booker’s election to the gubernatorial ballot and risking losing his own landslide. The special election cost New Jersey taxpayers (like me!!) millions of unnecessary dollars and showed the bombastic Christie for what he truly was; just another political climber interested in one thing, himself.

And now, with his unnecessary bridge work, it’s all over.

Fraser P. Seitel has been a communications consultant, author and teacher for 30 years. He may be reached directly at [email protected]