Consumers are less likely to open their wallets for disaster relief charities this year than they were in 2017, according to a study just released by Ketchum.

The Ketchum Disaster Relief Holiday Giving Study found that just 33 percent of respondents were planning on giving money to a disaster relief cause this holiday season, as opposed to 40 percent last year. That corresponds to a similar drop in overall giving, with 40 percent of this year’s respondents saying they give money during the holidays, down from 49 percent in 2017.

Despite a string of major natural disasters this year (including the California wildfires), disaster relief came in surprisingly low on the study’s list of causes that respondents were most interested in supporting. Animal welfare was the #1 choice, with 39 percent of respondents saying it was a priority for them. Children’s education, hunger, the environment and mental health rounded out the top five, with disaster relief holding the #8 position.

Even so, a sizeable majority of respondents (86 percent) still said that they would be more willing to give money to causes supporting disaster preparedness and relief this year than they were last year. 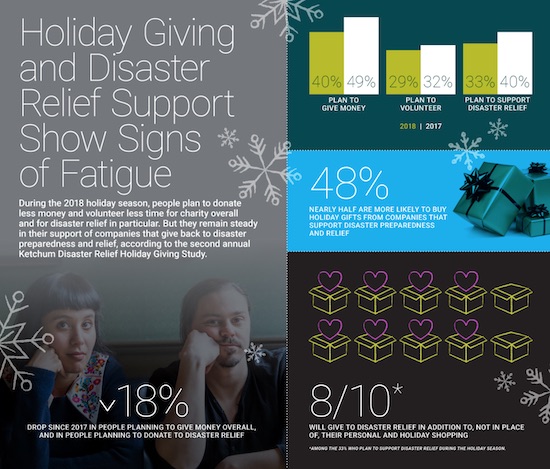 The most popular form of giving was to purchase products with proceeds going to a charity (55 percent). Point-of-sale donations (those made in a store) came in second, with 44 percent of respondents citing it as a form of giving they typically use. Social media donations (18 percent), donations made through an employer (16 percent) and texting donations (13 percent) followed on the list.

Consumer interest in brands that drive awareness and funds for causes has a significant lesson to teach companies, according to Monica Marshall, VP and director of Ketchum’s Purpose specialty. “Companies committed to issues that align with their mission and their customers’ values can differentiate while increasing consumer loyalty,” Marshall said.

When it comes to which disaster relief organizations are most popular with charitable givers, the American Red Cross comes out on top (50 percent, holding steady from last year). The Salvation Army (46 percent, up from 38 percent last year) and Habitat for Humanity (28 percent, up from 23 percent) both gained in popularity, while local charities showed a seven percent drop.

The survey also showed that 83 percent of respondents who plan to give to disaster relief are doing so in addition to, not in place of, their personal and holiday shopping.