Clients spent $3.42 billion on lobbyists last year, the highest levels in nearly a decade, according to a report released by nonpartisan research group the Center for Responsive Politics.

It’s the largest sum spent on lobbying activities since the industry’s record-breaking peak in 2010, the year that Obamacare was passed by Congress and signed into law, according to the CRP’s report.

Shelling out $280 million, the pharmaceutical sector spent more on lobbying than any other industry last year, surpassing its previous 2009 lobbying record of $272 million. The trade groups and companies inside this sector also broke records: the Pharmaceutical Research and Manufacturers of America spent $28 million in 2018, also beating its 2009 record of $27 million. PhRMA members Pfizer, Amgen, Bayer, Johnson & Johnson and AbbVie, were ranked as top pharmaceutical-industry spenders. 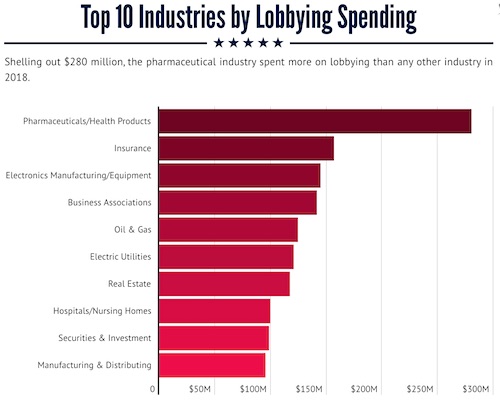 The U.S. Chamber of Commerce came in as the top single spender, dropping nearly $95 million on lobbying expenditures last year. According to the report, the USCC spent nearly $26 million in 2018’s fourth quarter alone, in light of Trump’s tariff war with Canada and Mexico. The National Association of Realtors came in at second place with a record-setting total of nearly $73 million, spending $19 million in Q4, more than any group reported. The Open Society Policy Center ($32 million), PhRMA ($28 million) and the American Hospital Assn. ($24 million) filled out the top-five single spenders for 2018.

Data for Center for Responsive Politics’ report was supplied by the Senate Office of Public Records and was published on the non-profit’s online database, OpenSecrets.org.