Protesters at Chevron's May 28 annual meeting in Midland, Tex., were paid $85 a piece to express frustration over the oil company’s victory in its long-running legal battle concerning pollution in Ecuador, according to a Bloomberg BusinessWeek report today. 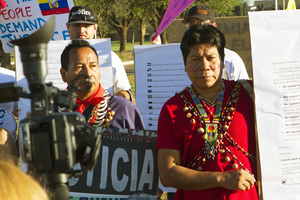 They were led by natives of the Ecuadorian Amazon rainforest region site of the contamination left by Texaco, which become part of Chevron.

One sign read, "Chevron, you can run but you can’t hide," apparently alluding to the remote site of the session.

A DFLA Films of Los Angeles spokesperson said it paid the $85 tab to people to serve as “extras/background people” for filming the protest, which was organized by MCSquared PR of Brooklyn.

That shop’s boilerplate says its "devoted to collaborate with public and private clients in finding that universal voice that enables them to connect, relate and diffuse their message in the most efficient way across cultural and language perimeters."

MCSquared distributed a release on CSRwire on May 28, highlighting the protest without mentioning cash payments.

Jean-Paul Borga, who is listed as contact, could not be reached about Bloomberg Business Week’s contention that "morally empty activism" fails to serve “the interests of the poor people in the rain forest.”