Spanish colonial architecture at the AAA Five Diamond resort provides a sense of casual elegance. It is set amid 200 acres of verdant hillsides and rolling valleys within the master-planned community of Aviara. 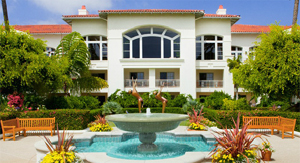 Those individuals were among the 151 at the 2011 misnamed Seminar at the Ritz-Carlton in South Beach, Fla., and will probably be at the 2012 meeting.

The 2011 meeting featured an address by Donna Shalala, president of the University of Miami and Secretary of Health and Human Services under President Clinton. For the first time, the preliminary program had no media biggies such as Maria Bartiromo, Michael Bloomberg or Eleanor Clift who have spoken in the past. Another first was running the program from Sunday to Wednesday rather than Wednesday through the weekend.

Nearly $1 million will be spent in this years four-day meeting by PR execs and their companions, since registration is about $3,500 and travel/hotels/meals/golf/tennis/spa add about $5,000. Not one word of what is said will escape if the leaders have their way.

How this group can enjoy 501/c/6 educational status is beyond us. It only educates a handful of PR execs. C/6s are supposed to improve an entire line of business and not just the fortunes of its members. Exchanging resumes is a major activity since there were 49 freshmen attendees in 2011, testimony to the high turnover rate of CEOs. A booklet of resumes is usually circulated each year.

Yet in 2007, under the leadership of Jon Iwata of IBM, it removed the PR from its name (although not in its tax returns).

Iwata should earn his 2011 Paladin Award of the Foundation of the PR Society by doing the heroic thing and restoring the PR to the name. Otherwise, Seminar is a front group with a misleading name. Despite the variety of titles used by members, they perform what the public understands to be PR functions. Revenues in 2009, latest year available on GuideStar, were $637,128. [EIN is 41-1838593.]

The annual Financial Follies show and banquet of the New York Financial Writers Assn. is also something that would not win the approval of Krugman.

It is another relic of the 1960s and 70s when PR people used reporters as props when they wanted to go to the latest Broadway show, spend a day playing golf, dine at the best restaurants, etc. They needed reporters to justify such spending. Both companies and reporters got wise to this expensive sham and put a stop to it in the early 1980s.

The Follies night does not even win the approval of NYFWA itself. The groups Statement of Ethics says, Members should avoid any preferential treatment, favors, gifts, and entertainment which might, or might appear to, influence their judgment.

The spectacle of more than 400 writers employed by the biggest names in financial journalism (New York Times, Wall Street Journal, Bloomberg, Reuters, etc.) being wined and dined at a $400-a-ticket dinner (plus drinks before, during and after) certainly gives the appearance of coziness.

PR people from some of the same banks and financial institutions represented at (PR) Seminar attend the night including UBS, PNC Financial and Prudential Financial. Executives of numerous Wall Street Houses are present.

Harpers media columnist Thomas Frank, in an excellent column in November 2010, wrote that journalisms greatest foul-up of recent years was its almost complete failure to warn the public about the collapse of the subprime bubble.

A mystery is why NYFWA in 1995 ignored the victory scored by the ODwyer Co. in its battle vs. Dean Rotbart (both Rotbart and myself were members). The Reporters Committee for Freedom of the Press headlined Good News: PR Mogul Beats PR Mogul. The Deadline Club, New York chapter of the Society of Professional Journalists, headlined on page one of its newsletter: Deadline Club Supports Jack ODwyer in Lawsuit.

Lawyer Jane Kirtley, executive director of the Reporters Committee, said the decision underscored the right of journalists to accurately report on speeches, writings and presentations that are of public interest and concern.

The ruling has taken a powerful tool of censorship from those who prefer not to have their presentations subject to public scrutiny, she told Anne Jennings, law librarian at Sinkler & Boyd, Charleston, who wrote 2,500 words on the decision in 1996.

Jennings herself said the decision which supports the rights of the press and their ability to accurately report the news, is significant to the publishing industry and provides an excellent examination of the fair use doctrine as it applies to de facto publication, the purpose of the publication, and the amount of the work used. The facts presented here clearly support the Courts dismissal of plaintiffs claims and the rights of reporters.

Not a word of praise or even recognition escaped NYFWA. It clings to this policy of considering the ODwyer Co. unmentionable by refusing a request for it to join the National Press club, New York Senator Liz Krueger and PR Watch in condemning PRSs written boycott against the ODwyer Co.

The legal attack on the ODwyer Co. by Rotbart, with the PR Society sitting in the wings since it had perpetual full copyright to the speech, needs to be re-examined.

A major culprit in this debacle is inaccurate statements in coverage by NYTs William Glaberson. He was only too glad to get my coverage of the Rotbart speech and did 926 words on it for the Dec. 27, 1993 edition.

However, he incorrectly said I made a secret tape recording of the speech. The Rotbart speech on Nov. 16, 1993 was given in an open session at the PRS conference attended by more than 150. It was based on the lengthier Newroom Confidential seminars that Rotbart gave only at PRS no one was required to sign a confidentiality agreement as was usually required. I made a tape recording to insure accuracy. Rotbart saw me and acknowledged my presence. I had a press badge showing I was a PRS-credentialed reporter.

Glaberson also falsely wrote I published the transcript. That would have been copyright violation. I used less than 800 words in any stories, which were under the supervision of a law firm. Large portions of what Rotbart said were sent to nine reporters who were mentioned by name. They wanted to see the context in which their names appeared. The court ruled that was not violation of copyright.


Glaberson Says I 'Slipped in'

Continuing the false theme that I was somehow doing something sneaky and improper, Glaberson wrote in a March 7, 1994 Media Business column that Rotbart was my arch enemy and that I slipped in to a sample session of Newsroom Confidential.

Rotbarts publication, The Journalist & Financial Reporting, focused on the media and reporters while that was but one subject area of ODwyer media. Our main competitors were PR News and PR Reporter. I was mostly unaware of the existence of TJFR and Rotbart was not any arch enemy of mine.

I did not slip in to anything but had all my flags flying.

Glaberson opined that my stated intent was to provoke irritation at Mr. Rotbart for his portrait of journalists as unsavory characters.

My intent was to report was Rotbart had been saying in his secretive Newroom Confidential series.

In the same column, Glaberson falsely claims that Attack by transcript appears to have worked. Mr. Rotbart recently announced that he had canceled the seminars scheduled for cities across the country because of a campaign of harassment and intimidation by a competitive newsletter.

There was no such transcript.

Glaberson concluded the March 7 column by saying Rotbart had hired a lawyer who told him not to comment on anything concerning ODwyer.

Another unfairness by Glaberson is that he talked to Rotbart for this second column but not to me.

The ODwyer Co. and I were sued for $21.5 million+ on March 24, 1994. Unspecified damages were sought for copyright infringement and unfair competition and more than $6.5M in compensatory damages and $15M in punitive damages for libel, slander and injurious falsehoods..

Since Glaberson was enough interested in this story to do a full column on it and then a half a column, why didnt he also cover the lawsuit?

Although my story was said to have damaged the Newsroom Confidential series, a web search finds it is still being offered including a $2,000 Professional Executive Workshop version.

The program has a 10-year track record of success, says the website. It focuses on the behind-the-scenes nature of journalists and newsrooms. It debunks the myths of how and why news decisions are made. Instead of myths, Newsroom Confidential gives participants practical, proven techniques for increasing media exposure and building strong, lasting bridges to the nations news media.

A Rotbart bio notes that Following an award-winning career as a reporter and columnist for The Wall Street Journal, Rotbart has launched and operated more than a half dozen profitable businesses primarily in the news, PR and consulting fields. In the process, he has created jobs for more than 500 employees, managed multi-million dollar budgets, and worked closely with many of Americas largest and most respected companies.

He lives in Southern California with his wife and two children.

Rotbart was not only a member of NYFWA but a graduate of the Columbia University J School. The Columbia Journalism Review wouldnt touch the subject either although the decision of the Court made the top story in the New York Law Journal and a page in the American Journalism Review.

Terri Thompson, director of the Knight-Bagehot Fellowship at the Columbia J School, was president of NYFWA in 1995-96.

The J School in 1993 had been hit with The New Republic cover story on it by Michael Lewis entitled, J-School Ate My Brain. After spending time at the school, including attending classes and interviewing teachers and students, he lambasted all of journalism education, saying journalism cant be learned in an institution. The best journalists are almost the antithesis of professionals, he wrote.

The horror of disrepute, the preternatural respect for authority and the fear of controversy that so benefit the professional are absolute handicaps for a journalist, he added. Asked by a teacher for his nut graph or null hypothesis, he said it was that the Columbia J School is all B.S.

Costs of the J School at that time were about $18,000 plus $10,000 for living expenses. By 2009 they had risen to nearly $70,000 (including living expenses) prompting journalist Richard Sine to write on the Huffington Post that, given the catastrophic decline in reporting jobs, studying journalism was the equivalent of taking up blacksmithing, bloodletting or steamship design. .
ODwyer publications gave prominence to the Lewis article and that perhaps earned me the enmity of the Columbia J School.

The issue on the table now is an epidemic of press persecution and interference worldwide that is being attacked by Navi Pillay, High Commissioner for Human Rights of UNESCO. Her campaign has been kicked off with a 51-page report on the impunity enjoyed by the press bashers. Governments and professional associations sit on their hands (and may even be the perpetrators) instead of seeking the offenders, the report says.

Reporters should be able to write critically of governments and trade associations without fear of being sued, jailed, slandered, defamed or threatened with arrest.

There are 26 J Columbia School student members of NYFWA plus Dean Starkman, editor of the business section of CJR.