Communications and marketing executives are on board with the current trend toward CEO activism, according to a new study from Weber Shandwick and KRC Research.

A sizeable majority (62 percent) of the executives polled for the study said they would approve of their company’s CEO taking a public position on such issues as climate change, gender pay equity, immigration and same-sex marriage. For companies whose CEO has already spoken out on a hotly debated issue, the approval rate rises to 78 percent.

One reason for that approval: Four out of five respondents (80 percent) said that some advantage to their company’s reputation would likely result if the CEO were to speak out on issues, with 19 percent saying it would be a big advantage. At companies with experience of CEO activism, 67 percent said that it did have a positive impact on company reputation.

In addition, study respondents said that the impact made by CEO activism, was long-term, regardless of whether the impact was positive or negative. 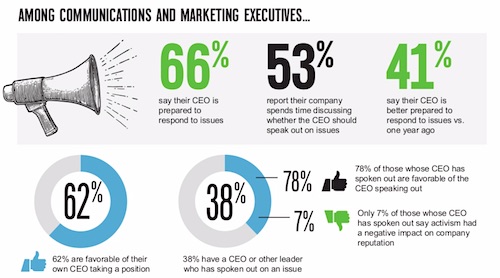 Because of the increasing power of CEO activism, most companies are spending more time planning for it. More than half (53 percent) of the execs surveyed reported that their company spends time discussing whether their CEO should speak out on hotly debated current issues. Of those companies, 59 percent said that they have increased the amount of time devoted to discussing CEO activism over the past few years.

The survey respondents also seemed to feel that the time spent discussing CEO activism was paying off, with 41 percent saying their CEO is better prepared to respond to issues than was the case a year ago. Because of that improvement, 26 percent felt that their CEO was “very prepared” to handle hot-button issues, with another 40 percent being “somewhat prepared.”

A company’s market sector also played a role in how strong the effect of CEO activism has been on it. While 45 percent of the communications and marketing execs from companies in the tech sector said that their CEO had spoken out, that number dropped to 37 percent for financial services/insurance companies and government/social service organizations, and was just 33 percent in the healthcare sector.

Tech companies also notched the highest number of CEOs (33 percent) deemed by survey respondents to be “very prepared” to take an activist role, while those in the healthcare sector came in at just 14 percent.

The study also asked respondents what organizations should do to prepare CEOs to respond to issues. “Get all the facts,” “keep up to date on current events” and “invest in research and media training” all came up on the list of strategies for successfully implementing CEO activism.

Making sure that public statements from CEOs are in line with the values of the organization was also mentioned. “Nothing worse than a CEO taking a position that they’re not willing to do in their own company,” one respondent said.

“CEO Activism: Inside Comms & Marketing” was the result of an online survey conducted in May 2018 of 500 communications and marketing professionals in the US, UK and China.